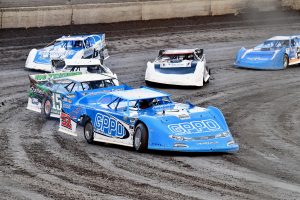 The 2019/20 season has been a massive one so far, but with three nights of racing still left on the calendar it is still far from over and with the points battle so tight, it is anyone’s game!

Kye Blight has won the last seven feature races in a row here in Western Australia, but with his season now over and his car sold, not to mention Joe Godsey now back home in America (the only other person to win a feature race since last November) the field is wide open for one of the other five feature winners so far this season to claim another, or for a new winner to make their presence felt.

Brent Vosbergen, Brad Blake, Warren Oldfield, Marc Giancola and Paul Stubber have each claimed one feature win so far this season (except for Vosbergen who has claimed two) and they would all love to claim another this weekend.

Vosbergen’s WA Title defense started out strongly but ended in disaster at the last show, so the team has been working hard to repair the car in readiness for Saturday nights showdown where he would love to grab his third win of the season.

Warren Oldfield would also like another win to go with his one victory and six other podium finishes this season which sees him leading both the Carbusters Pro Dirt Series and the Perth Motorplex Track Championship. He has Michael Holmes pursuing him in both of those point scores, but Holmes is yet to score a main event win this year despite four podium finishes. Both drivers will be tough to beat this weekend.

Brad Blake has been resting up after a hard hit at the State Title and he will hopefully be right back on the pace while Marc Giancola and Paul Stubber will each be keen to get back into the form that saw them both claim a feature race win earlier in the season.

Veronica McCann and Freddy Kinsella have been fighting it out all season in the point scores, McCann fifth and Kinsella sixth in the Motorplex points, while Kinsella is fourth and McCann fifth in the Carbusters Pro Dirt Series points. Kinsella has grabbed his first podium finish this season while McCann has been oh so close in fourth, so both will want a good run this weekend.

New South Welshman Bruce Mackenzie is back in the field this weekend and will hope to build on his seventh at the last show, while others like Jay Cardy and Ryan Halliday have also been on the podium this season but would love to get that elusive win.

Adding some extra excitement to this weekend’s event is some drivers we have not yet seen compete this season. Clint Noakes has purchased a new car and after being out of Late Models for a number of seasons is expected to return this Saturday night and shouldn’t take too long to be back on the pace. Kalgoorlie drivers Jeff Pahl and Shaun Cubbage have also nominated to make their first trips down to the big smoke as part of the Pro Dirt Series while former Kalgoorlie local Laura Byrnes is also set to make her debut aboard the ex-Ken Macpherson machine. All three will be looking to just get laps under their belts, with Byrnes in particular excited just to hit the track in her first competitive hit out since moving up from other Sedan divisions.

All the regulars are back including David Nylander, who has repaired his immaculate #54 machine after a big crash at the last show, Jai Mazzini and Daniel Ameduri who were fifth and sixth in the State Title respectively, impressive rookie Matt Amato and of course Cody Avins who will be hoping to put his rough run behind him and score some good results.

It is sure to be another huge night of action this Saturday night in what will be Round Fourteen of the Carbusters Metal Recycling Late Model Pro Dirt Series!! 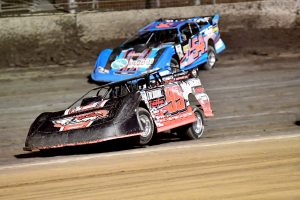