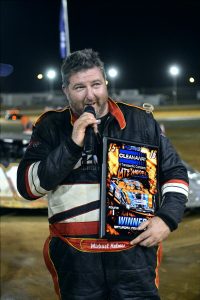 With the Australian Title just under a fortnight away, the thunder and lightning Late Models will this weekend have one final hit out to get themselves ready for the event that they all want to win.

A good field of fourteen cars have nominated to make the short trip down the highway to Bunbury Speedway this Saturday night and although numbers are slightly down in the title lead up, it is still a quality field sure to put on a great show.

Of course, this weekend’s show is also round number eight of the season long Racin’ Tyres and Accessories Pro Dirt Series, with the top seven cars in the series all nominating.

Warren Oldfield currently leads the points, some thirty seven markers ahead of brother Jamie. The duo will go into the Australian Title as the hot favourites and this weekend will see them doing final testing and checking as they fight hard for the win.

Jay Cardy sits in third and although he hasn’t had a feature win yet this series, he has claimed four podiums and surely isn’t far from breaking through for the win. If a little bit of luck goes his way he will be a real threat this weekend.

Kye Blight is currently fourth overall and after a feature win at Kalgoorlie and some other strong results his confidence is sky high. He will be going hard this weekend to get another win at Bunbury.

Michael Holmes is the last start winner at Bunbury and he currently sits in fifth for the series points. He too is another that could use a little luck and if he gets it, is another who could definitely be at the pointy end come feature time this Saturday.

Ken MacPherson and Jayden Meckenstock hold down sixth and seventh respectively and will be hopeful of a strong run this weekend as both continue to improve, with results starting to show.

Hometown hero Brad Blake is another who will be hoping for a strong run going into the title. He is a threat whenever he turns up and despite a rough run lately he did score a podium in the last race meeting at the Perth Motorplex, a result he will be keen to improve on this weekend.

Kodee Brown came second in the last round of the series, showing that he has taken to the Late Models like a duck to water. He improves with every drive and his no holds barred driving style is sure to suit the big bad Bunbury Bullring this weekend.

Brent Vosbergen and Jed Rogers make a welcome return to the series at Bunbury for this weekend’s show and both will be keen to put on a show, while Jamie Moon has repaired his car and is back in action once more after recent engine issues. Jai Mazzini and Simon McNab have also nominated for the show and will be looking to get some strong laps under their belts in preparation for the title.

With only a matter of days until the Australian Title, to be held next weekend at the Perth Motorplex, every one of the drivers will this weekend be throwing everything they can at getting the win, trying to get the upper hand heading into the title.

It is going to be a massive show so make sure you are at Bunbury Speedway this Saturday night!