Warren Oldfield has last night once again shown his fellow competitors that a crate motor is incredibly competitive as he raced his way to the win in Round Three of the XLI Pro Dirt Series at the Perth Motorplex. 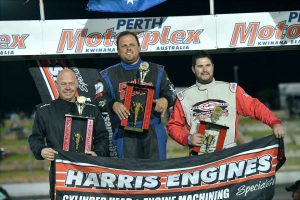 Oldfield had a perfect night, winning his two heat races to claim the Pancho’s Pole Position award ahead of the twenty lap feature event.

He would share the front row with Brad Blake, but it would be Paul Stubber who made the early move as he raced under Blake to grab the lead. Matt Goodlad would follow Blake through, with Oldfield sandwiched between them in second.

Blake would shortly after fight back and retake third from Goodlad while up front Oldfeld would do the same to Stubber, grabbing the lead on lap three. At that point it would only be momentarily though as Stubber raced back around the outside, but Oldfield would simply not give up and continued to pursue Stubber.

Behind them, Veronica McCann was beginning to make her move, grabbing fifth from Jay Cardy on lap four.

Blake set out after Oldfield for second, with Stubber just ahead and Goodlad just behind; the top four pulling away slightly from the rest of the field.

Stubber touched the turn three wall but manage to continue, however at the opposite end of the track at the same time Jayden Meckenstock would do the same but end up bringing out the yellows.

The restart was where Oldfield took his chance to assert his dominance, grabbing the lead before Stubber went wide in a move that also cost him second place as Blake too moved underneath him. Shortly after Goodlad would move past Stubber for third while McCann moved into fourth on lap eleven. 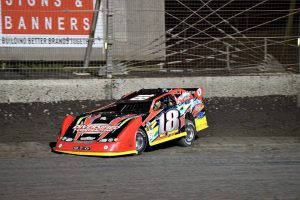 Oldfield built up a gap on Blake, Goodlad and McCann who were racing in tight quarters, while Brent Vosbergen and Ryan Halliday, who were having their own battle for fifth, would also close on the leading group in the final laps.

Up front though, Oldfield built up an unassailable lead, crossing the line nearly eleven seconds ahead of his nearest rivals to claim his seventeenth Perth Motorplex feature win. Brad Blake was second across the line, followed by Matt Goodlad, Veronica McCann, Brent Vosbergen and Ryan Halliday rounding out the top six. Interestingly, fifteen of the original seventeen starters were able to finish the race.

The Late Models once again have a short turnaround time, with the fourth round of the XLI Pro Dirt Series scheduled for this coming weekend, Saturday the 11th of November, at Manjimup Speedway.