One of Western Australian most decorated drivers; Jamie Oldfield has had a rocketing start to this year’s Maxima Racing Oils Pro Dirt Series, currently sitting in second place in the point standings, some six points of leader Brad Blake. But after what many people would call a great start to the season, Oldfield doesn’t think he’s firing on all cylinders.

“We haven’t had great car speed all year and in my standards we’ve been struggling. We’ve got a couple of results but they haven’t come easy. I’ve gone through way more tyres than I should have and that’s just because we haven’t had a good balance with the car.” 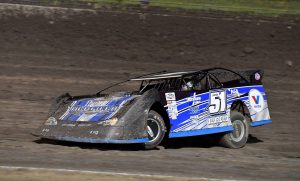 In the 2014 rendition of the USA Invasion Tour, the opening round of the series at the Quit Collie Speedway is still regarded as one of the best Dirt Late Model races still to be held in Western Australia when Oldfield, along with Americans Steve Francis and Jeep Van Wormer battled for the lead the whole distance where the race went from green the checker non-stop. During the event, Oldfield in fact hit the lead and led the middle 12 laps, until relinquishing the lead back to Francis.

“It was great.” Oldfield simply says. “To be able to pass Steve Francis in lapped traffic was a great feeling even though he drove back by me a few laps later. These guys don’t mess around when they’re here and I like to think it helps me lift my game racing against them.”

In the four year history the USA Invasion Tour has been held, that was the closest an Australians has been to defeating an American here in WA. But as he explains with us, it may take a little longer for an Australian to get that first victory against an American.

“To be honest I don’t think we will just yet.”

“I’d like to say that we could but these guys are professionals. It would take a real bad night on their part to beat them and I’m not counting on that happening. I’m not saying I won’t be trying, I’ve been out testing trying to get my car better so I can be faster but I am a realist and I would be surprised if Any west Aussie beats them in a round this year.”

Oldfield though does realise that since the last time the Americans landed here in Australia in 2015 the competition has really raised.

“Most definitely, the level of equipment has risen across the board and more guys have got their act together with setups and driving.”

As we move into the 2017 version of the USA Invasion Tour that includes Francis, Devin Moran and Jason Fitzgerald. Oldfield explains his and Oldfield Racing, along with his brother Warrens intentions coming into the mini-series.

“I will be the only one doing all of the rounds at this stage and as I said I’m a realist. If I could be in the top 3 after all 4 nights of racing are done I’d be happy with that. I’d love to get a win and hopefully we can come close somewhere but time will tell.”

Watch Western Australia’s best take on the American Invaders at the 2017 USA Invasion Tour at the following rounds: