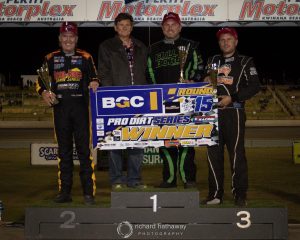 Jamie Oldfield spent a lot of time away from Late Models recently, but after returning at the State Title two weeks ago he has been right back on the pace and tonight at the Perth Motorplex he outclassed the rest of the field to claim his third Gold Cup victory!

After two heat wins from two starts it was actually Paul Stubber, driving a specially painted up tribute car to Stan ‘The Man’ Starcevich who qualified on pole, with Jamie alongside him after he also claimed a heat win.

As the thirty lap feature race went green, Stubber shot to the lead, but Oldfield went right around the outside coming out of turn two and grabbed the lead with a paralysing burst of speed to lead the opening lap from Stubber, an impressive Joe Chalmers and Jamie Moon who also claimed a heat win earlier in the night.

Australian Champion Kye Blight was already up to fifth from position eight at this point, quickly passing Moon to take fourth and set out after Chalmers for third, while up front Oldfield had a moment and went high coming out of four, allowing Stubber to race through and take the lead on lap three.

With five laps complete David Nylander spun down the front straight, setting up the first restart of the thirty lap event.

The next restart saw at least seven cars involved in an incident in turn four, but luckily only Matt Amato was unable to restart, seeing seventeen cars lined up for the remaining twenty five laps.

Stubber would lead away the field, Chalmers getting the best of it as he moved into second and relegated Jamie Oldfield into third.

Kye Blight would be fourth, fighting off Jason Oldfield, with Matt Goodlad making some huge moves to grab the sixth position on track.

Unfortunately Goodlad then spun, with Matt Nylander, Veronica McCann and Jamie Moon all left with nowhere to go, bringing out the yellow lights once again.

The restart saw Stubber leading Jamie Oldfield, with Joe Chalmers third followed by Jason and Warren Oldfield, who had started in position fourteen to be running fifth.

Chalmers then retired infield on lap nine bringing his strong run to a sudden end, with Stubber now leading Jamie, Jason and Warren Oldfield, while Blight was in behind them.

McCann headed infield on lap eleven, but up front, Stubber and Jamie Oldfield had pulled away, while Jason Oldfed, Warren Oldfield, Kye Blight and Jamie Moon traded places every lap.

Blight moved into third on lap fifteen but Jason Oldfield was having none of it and raced back by, with Warren also looking for a way back by Blight who found himself in an Oldfield sandwich.

By now, Stubber and Oldfield were in lapped traffic, the two running in close quarters with only twelve laps remaining.

Stubber had a hairy moment on lap twenty four with a lapped car, but Jamie was unable to capitalise, though he did draw closer.

With two laps to go Oldfield went right around the outside of Stubber to claim the lead and from here he didn’t give Stubber a chance, going on to cross the line in first place, his third Gold Cup win, his thirteenth Late Model win at the venue and twenty third victory there across all divisions.

Stubber held on for second while Jason Oldfield was third and Warren Oldfield came from fourteenth to fourth, in the process grabbing the DTN Hard Charger Award.

Ken Macpherson would round out the top five.

Just one round remains of the 2020/21 BGC Pro Dirt Series, which is scheduled for Saturday the 17th of April, 2021, so make sure you are back at the Perth Motorplex for that event!