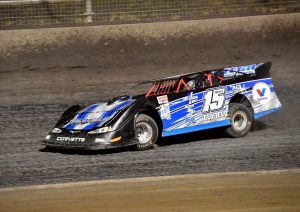 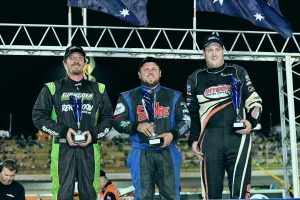 Warren Oldfield last night took out the second last feature for season 2015/16, and in the process extended his lead in both the RACIN’ Tyres and Accessories Pro Dirt Series and the Perth Motorplex Track Championship.

Oldfield started on the front row alongside Jay Cardy and it was Cardy who grabbed the lead, fighting hard to hold off Oldfield. For sixteen laps Cardy managed the feat, but eventually the pressure came too much and Oldfield was able to slide by on lap seventeen.

Behind the leading duo, a number of cars had time running in third, with Brad Blake, Ryan Halliday and Ken MacPherson all holding fourth place at one point or another, but on lap six it was Giancola who took over the running and was never passed from here.

The whole division put in a credible performance, with thirteen cars starting the final and all thirteen finishing, in what was a non-stop, flag to flag race.

In the end though, it was Warren Oldfield who held strong, to defeat Jay Cardy by just 0.3 seconds, while Marc Giancola was third.

Earlier in the night the opening heat saw disaster almost immediately when Kye Blight came to a stop after just one lap with a blown engine, ending his night early, with Marc Giancola going on to claim the win from Brad Blake and Jay Cardy.

Heat two saw Warren Oldfield defeat the consistent Blake and brother Jamie Oldfield, while Jamie’s fortunes changed in heat three when he suffered component failure, leaving Veronica McCann nowhere to go but into him, eliminating both from the rest of the night’s proceedings. Jay Cardy went on to win the heat from Michael Holmes and Warren Oldfield.

With just one round left for the season, Warren Oldfield is in prime position to complete the double championship win, with a number of drivers still fighting for position behind him. The final round will be this weekend at the Perth Motorplex, so keep your eyes peeled for all the details in the upcoming week.