Jamie Oldfield has tonight grabbed his second West Australian Late Model title in blistering fashion as he raced away from all comers to take the win.

Oldfield was in fine form all night, recording the fifth quickest time before grabbing a heat win and a second place to start the thirty lap title race on pole alongside his brother Warren Oldfield, who was driving the second Michael Holmes #91 machine.

The brothers hit the line together as the green flag flew the first time, Jamie leading Warren before the yellows came on for Matt Goodlad, Ryan Ludlow and Jason Bond who had become wedged together in turn three with one lap completed. 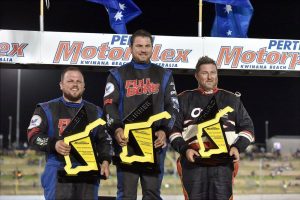 The second attempt at a start again saw Jamie again lead the field away with Warren in hot pursuit. As the rest of the field jockeyed for position behind them, the two Oldfield boys would begin to pull away and put on their own show.

James Batley spun infield but was able to rejoin, albeit a lap down, but in front Jamie was working the high line as Warren pursued the low line, Jamie leading the first six circuits by the barest of margins before Warren finally stuck his nose in front on lap seven

As soon as he did this he then found himself faced with lapped traffic, which is where Jamie again made his presence known. He closed the gap on Warren then retook the lead on lap ten, but two laps later Warren turned the tables and used the traffic to his own advantage so he too could retake the lead.

Alec Melvin was the next to spin but he too kept going as Warren began to open his gap over Jamie up, just over one second on lap fourteen.

With the leading duo having worked their way through traffic with relative ease, there was a four car battle for third place which managed to get involved with a pile of lapped cars, meaning there was about half of the original twenty two car field fighting for the same pieces of real estate in what was an awesome spectacle.

By this stage Jay Cardy had cleared into third, but with the lapped traffic slowing him slightly, both Kye Blight and Michael Holmes were able to move by him. Cardy fought back and retook fourth from Holmes then once again set out after Blight.

Back up the front again and Warren and Jamie were suddenly side by side on lap seventeen as Jason Bond became the first official retiree of the race. On lap twenty Jamie retook the lead once again and in very quick fashion, Jamie had put a number of lapped cars between himself and Warren and opened the gap up to over three seconds in his favour.

Jay Cardy grabbed third again from Blight before becoming the second and final retiree from the race, heading infield and allowing Holmes and Blight into the final podium position battle once again.

As Jamie lapped fifth place, he touched the wall in turn one sending a shower of sparks out, but it didn’t slow him down, Jamie going on to cross the line some 6.553 seconds ahead of Warren while Michael Holmes snuck in for third place. Kye Blight would be fourth and was the final car to be running on the lead lap.

The original thirty lap record was established by Brad Blake on the 27th of January 2007, but the race had stoppages. Jamie bettered this time by over seven minutes, but as there had been a stoppage after one lap, Jamies is also an unofficial record.

Now on his second title reign, Jamie was thrilled to capture the title once again and one can be confident that this will give his Pro Dirt points a boost and set him up not only for a strong run at the National Title but also a great finish to the WA Late Model season.