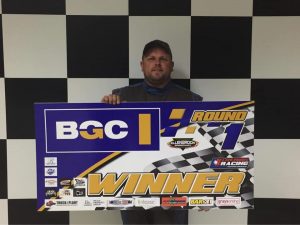 In what was the perfect way to start his Championship defence, Warren Oldfield has tonight claimed the annual Ray Tulk Memorial feature at Ellenbrook Speedway!

The event, which doubled as round one of the 2020/21 BGC Pro Dirt Series, marked Warren’s fifth win in the event in the last ten years.

It was a great night of racing at the Ellenbrook Speedway, with heat wins being shared by Kye Blight, Ken Macpherson, Paul Stubber and Oldfield, while early casualties would include Blight and Rob Wells who both had engine drama in the second round of heats, and Jason Bond who only completed one lap of the opening heat before retiring for the evening.

This would leave twelve cars to greet the starter in the thirty lap feature race and it was Oldfield who made the most of his pole position start to launch into the lead, closely followed by fellow front row starter Ken Macpherson who in turn was being pursued by Brent Vosbergen and Michael Holmes.

The yellows would come on with just one lap complete as Matt Amato came to a stop in turn one, setting up the first double Indian file restart of the race.

As the race got underway again, Vosbergen took advantage to move into second while behind them Paul Stubber also moved forward before kissing the wall and dropping to tenth.

Up front Oldfield was pulling away from Vosbergen with Macpherson, Holmes and Veronica McCann chasing hard, the top five separating from the rest of the field.

Daniel Ameduri was next to make a move as he raced past Jay Cardy for sixth.

As the laps wound down the order remained unchanged, but as Oldfield closed on lapped traffic, Vosbergen began to close the gap, while a few laps later Macpherson was also able to close the gap and join the party in a three way battle for the lead.

The three even managed to survive a hairy moment with a lapped car that saw Vosbergen launch into the air down the main straight and Macpherson going sideways across the start finish line, crunching his side. Luckily both cars were able to restart, while rookie racer Laura Byrnes became the only retiree of the race as part of the incident.

This set up a three lap restart in double fire formation, but cars would come together as the race went green, leaving Amato and Stubber stranded in turn four and a single file restart called.

The race would go green for the final time, with Brad Blake moving into sixth place as the only person to change positions as up front Vosbergen and Macpherson would pressure Oldfield, but it was ultimately for naught as Oldfield recorded his first win of the 2020/21 season. Holmes would finish fourth with Veronica McCann rounding out the top five. Joe Chalmers, Daniel Ameduri, Brad Blake, Matt Amato, Jay Cardy and Paul Stubber would round out the other finishers.

It was a great way to start off the new championship and now all eyes will be firmly focused on round two of the BGC Pro Dirt Series, to be held at the Perth Motorplex on Saturday the 31st of October!