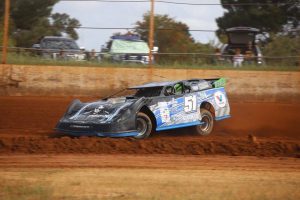 Despite limited seat time in recent memory, Jamie Oldfield has tonight climbed back to the top of the mountain, winning an epic thirty lap feature event at Ellenbrook Speedway for the opening round of the Sims Metal Management Pro Dirt Series and in the process, grabbing his third in the Ray Tulk Memorial event and his first since 2012.Oldfield would start off pole position courtesy of his heat result, alongside Kye Blight who also won a heat. Marc Giancola and Jay Cardy won the other two heats, and with four winners from the four heats, it shows that we are in for a big season in the Sims Metal Management Pro Dirt Series.

The first start wasn’t great, with Oldfield getting the lead from Kye Blight, but behind them Daniel Ameduri and Peter Seaton came together and spun, bringing out the yellows, then as the field was under yellows Mick Comley and Simon McNab spun in turn three.

Oldfield led away Blight, Marc Giancola and Paul Stubber who was quickly on his way through the field, looking for third under Giancola. Just as he looked to make the move there was a pile of cars spinning to a stop in turn three, to bring out the yellow lights again with just two laps complete.

Upon the resumption the front two cars again darted away while Stubber resumed his efforts to get past third placed Giancola. All of a sudden, as if from nowhere, Brad Blake burst onto the scene and passed Stubber, taking over the fourth place running.

The laps wound down and with ten complete the yellows came out again, this time for Joe Chlmers who again came to a stop and would watch the rest of the race from the infield. He would be shortly joined by Simon McNab, leaving thirteen cars for the resumption.

Up front the race was really on as it resumed, Blight closing on Oldfield and looking for a way through, while Giancola also snuck up on the leading duo and was biding his time, waiting for a mistake.

Giancola went side by side with Blight on lap fifteen for second but Blight had enough to pull away before Giancola made a slight mistake, having a half lose and seeing Stubber hit him and spin to bring out the yellows at the half race distance. Giancola was sent to the rear for his part in the incident while Stubber was reinstated in fourth place.

Oldfield again caught the field napping and raced away on the restart while Blight was under pressure from Blake and Stubber. Blake moved side by side with Blight then grabbed second from him on lap seventeen, then with ten laps to go had significantly closed the gap on Oldfield.

With five to go and just as Oldfield and Blake were really getting close, the yellow lights came on again, this time for Kye Blight who had suffered a flat right rear tyre. This would set up a final five lap stint and although the leading duo fought hard the order remained unchanged, while behind them Ken Macpherson put in one of the best drives of his career as he grabbed third from a fading Stubber who suffered a flat right rear tyre.

It was an epic opening round to the Sims Metal Management Pro Dirt Series and shows that the rest of the season is certainly going to be hot, with round two being held at the Perth Motorplex on Saturday the 27th of October! 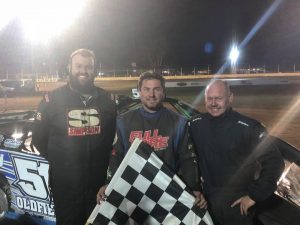