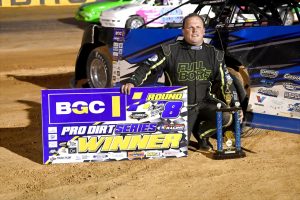 For the second time this season Warren Oldfield has claimed the feature win at his home track of Ellenbrook Speedway and in the process, extended his lead in the BGC Pro Dirt Series after six rounds and made himself the only driver now eligible for the BGC Bonus in the remaining two nights of the Late Model Nationals!

Not only did he claim the win on the first of three nights of the Nationals, but it was an Oldfield Racing top two, as brother Jason claimed second place, crossing the line ahead of third placed Joe Chalmers who recorded his very first podium finish in Late Models.

Veronica McCann would come from position three after a great heat win backed up by a third place to be tied with Blake on points coming into the feature (positions split by fastest lap times) while Jay Cardy would come from fourth place after two second place finishes in his heats. Ken Macpherson was the only other driver to claim a heat, but a DNF in his opening heat proved costly, seeing him starting from position eight.

As the race went green Blake would get the jump and lead the opening lap from Oldfield and McCann, but with just one lap compete the yellows would come on for Willy Powell who spun in turn four.

Blake led away the eighteen car field (Kye Blight, Rhys Wells and Jamie Moon the three drivers who started the night that were unable to start the feature) on the restart, with Oldfield, McCann, Jason Oldfield and Cardy rounding out the top five and the order would remain unchanged until the next yellow light, which came as Jayden Meckenstock spun in turn two on lap five.

The restart would see Jason Oldfield swoop by McCann to grab third place, then a lap later both Cardy and Joe Chalmers would do the same to relegate McCann to sixth.

The yellows would come out once again, this time for Rob Wells who came to a stop in turn two and had to be towed from the track, with Matt Nylander also retiring during the stoppage with damage to his #34 machine which up until that point had been showing significant speed.

Warren Oldfield would record the fastest lap of the race in the next stanza, which went for seven laps, during which time Oldfield also made his move on Blake to claim the lead, the yellows then coming on for Laura Byrnes whose race was over with twelve laps complete.

The next segment of the race saw Jason Oldfield finally make a move on Blake after tailing him for a number of laps, Oldfield officially grabbing second on lap twenty one, with Joe Chalmers, driving the race of his life, also taking advantage to grab third.

From here the order would remain unchanged, Oldfield going on to grab his second win of the season ahead of Jason Oldfield and Chalmers the Global XLI All Star winner in third. 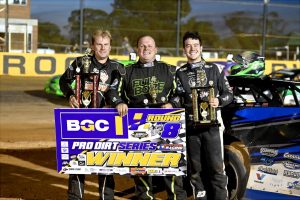 Focus now shifts back to the Perth Motorplex, firstly for a midweek show this Wednesday, followed by the final night of the Nationals, to be held on Saturday the 9th of January. This doesn’t give teams too much turn around time, so they will be working hard to ensure they are ready in just a few days’ time! 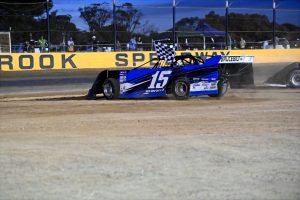