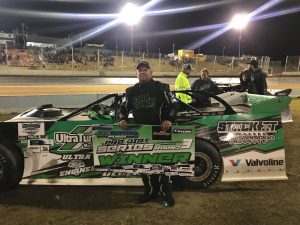 Warren Oldfield has tonight made his way back to the top of the Late Model tree, winning a great feature race at the Perth Motorplex, his twentieth overall win at the venue.

Oldfield started off position two in the feature race after a win and a third in the earlier heat races, while Brad Blake would start off pole position courtesy of his win and second place.

Oldfield and Blake were side by side at the start but it was Oldfield who got the advantage, leading Blake by a nose as they crossed the line for the first time, while Michael Holmes was in third behind them.

Just after the first lap was complete, the yellow lights would come on for Willy Powell and Jason Bond who came together in turn one.

Oldfield was clear on the restart as Holmes tried the outside line on Oldfield but ultimately it didn’t come off and he was forced to slot in behind Oldfield on the low line. 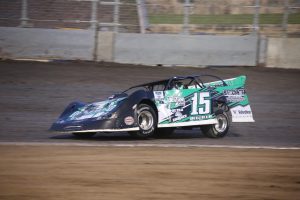 Matt Amato was having a sensational debut at the Perth Motorplex, running in fourth place until Paul Stubber passed him on lap five, at which point he then lost two more places to Daniel Ameduri, who earlier won his opening heat race, and Marc Giancola.

The order with ten complete was Oldfield, Blake, Holmes, Stubber and Ameduri, while Amato had managed to get back past Giancola for sixth.
Oldfield had opened up a three second gap at this point while Blake and Holmes were nose to tail fighting it out for second.

Lapped traffic nearly bought Oldfield undone on lap thirteen, while Holmes made the most of his chances to grab second from Blake on the same lap.
Looking back through the field, there was a huge battle for eighth place between Jay Cardy, Veronica McCann and Ryan Halliday, McCann storming through the middle to pass both cars coming out of turn two on lap seventeen. There was certainly action all over the track as just ahead of them Ameduri was stalking Stubber for fourth.

By lap twenty two Oldfield was in heavy lapped traffic, but Holmes was still unable to close the gap. By now Giancola had also closed the gap on sixth placed Amato and made the pass on lap twenty five, while Ameduri took over fourth place from Stubber on lap twenty six and set out after Blake for third.

With multiple position changes in the final ten laps in the end it was all Oldfield who won by a big margin over Holmes, while Brad Blake was forced to settle for third. Daniel Ameduri rounded out a great night to come home in fourth, followed by Stubber, Giancola, Amato, McCann, Freddy Kinsella and Jay Cardy rounding out the top ten. Only one car was unable to start the feature and only one other car recorded a DNF in the feature, showing the standard of racing throughout the night.

Courtesy of tonight’s results Brad Blake has a ten point buffer over Paul Stubber in the Perth Motorplex Track Championship, while in the Carbusters Pro Dirt Series Michael Holmes has a slender two point lead over Warren Oldfield, with Paul Stubber a further nine points behind in third.
There is not long to wait for the action to begin once again, with the fourth round of the Carbusters Pro Dirt Series getting underway next weekend, Saturday the 9th of November at Bunbury Speedway, so stay tuned this week for all those details! 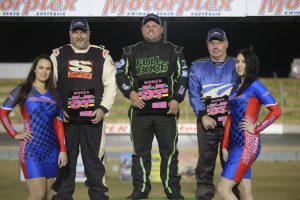