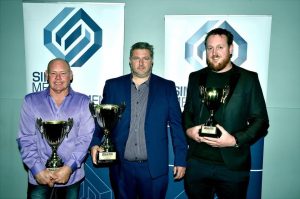 The 2018/19 season officially came to a close last night for the LMRWA with their annual awards night held at the Raffles Hotel.

A good crowd of Late Model drivers, officials, crews and fans packed into the venue to celebrate what was an epic season, with the first award presented being the one that drivers can only ever win once: the Rookie of the Year Award.

Thanks to competing consistently at most events throughout the year, winning his first heat at Bunbury and putting in some impressive performances, Freddy Kinsella was presented with the award, something he wasn’t expecting. 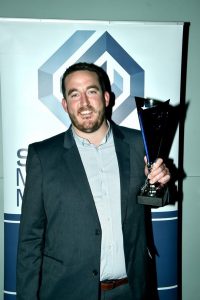 “I wasn’t expecting to win anything at all!” He said. “But thank you to all those who helped this season, I had a great time.”

Jayden Meckenstock was next to be called forward as he was presented with the Quiet Achiever Award, having started in Go Karts and Junior Sedans, now just completing his fourth season in Late Models and starting to get some consistent runs on the board. 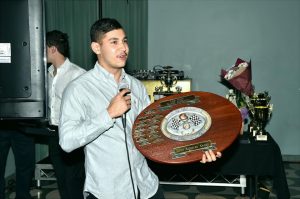 “Thanks to my Dad who does all the hard work” he said from the front of the room.

AJ and Heather Nylander were next on the microphone to present their Pursuit of Excellence Award, awarding it to Brent Vosbergen who they said was becoming a very strong racer.

“It was an unbelievable season” said Brent. “I couldn’t be here without the family and all those that help: it’s not just me standing here it’s the whole team.”

Marc Giancola was unable to be at the awards night but still received the Best Presented Award, thanking everyone via video message.

Chief Steward Jerome Sutton took the microphone next, thanking everyone who played a part throughout the season. His award was presented to a person who didn’t run in top five or six and didn’t win a feature but always presented professionally on and off track, and always had the best interest of Late Models at heart, with Veronica McCann the recipient. 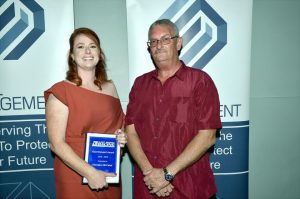 “This is really unexpected,” she said. “Thanks to Jerome as it’s good that someone sees the hard work that goes in despite it not panning out that well! Thanks also to Carl who does a lot of the work behind the scenes”

The Drivers Driver Award, voted on by all the drivers, was next, with Michael Holmes rounding out an epic season to claim the award.

“I’m a bit lost for words” he said from the front. “I like to drive hard but like to think I drive fair: to get voted by peers as a hard and fair driver I really appreciate that.”

CEO Norm Mazzini took the mic next revealing that although he is stepping down from the role he thought it was a fantastic season. He thanked the committee in Jay Cardy, Simon McNab and Paul Stubber, toasted absent friends and then also thanked the Perth Motorplex and Gavin Migro for their unwavering support.

He then thanked all those who work hard behind the scenes, finishing by awarding his CEO’s Award to Paul Persic for his work on videos and commentary throughout the season.

Third placed Jay Cardy was happy with his seasons efforts, saying “we started pretty well but missed setups sometimes and finished ok… now we just need to work on our restarts! It’s good to be competitive, and disappointing to not get a win but we still got some good results.”

Second place getter Brad Blake was also happy with his efforts. “Alan and I finally bit the bullet and brought a decent car and I learnt how to drive again!” He laughed from the front. “We are super happy with the new car and although it’s hard enough to win at Kwinana at the best of times the Title next year will be good: anyone who thinks they are coming over to take it away has another thing coming, we have best track in Australia!”

After previously claiming second and third in the series, Michael Holmes finally captured the series victory and was thrilled with the result.

“About ten years ago we were going ok in AMCA’s so thought we could join the Late Models,” he reminisces. “At the time I was told it would be a five year apprenticeship and it certainly was, five years later we were occasionally top five, then more often towards the front and now, eleven years later, we’ve finally hit it. Now all these guys we compete against are so good and it’s an honour to be on the top spot: I’m very proud. Finally I need to acknowledge my crew chief Darren who came on board this season and made all the difference.” 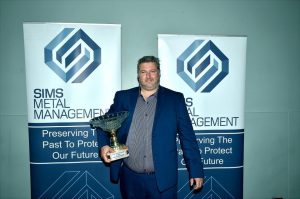 This would officially bring to a close season 2018/19. A huge thank you to all the drivers, crew, officials, families and fans who made the season what it was.

We look forward to seeing you all in 2019/20, the season set to be headlined by the National Title right here in Western Australia. In the meantime, you can still check out the Late Models as they compete in rounds of the Renegade Winter Series across the off season!