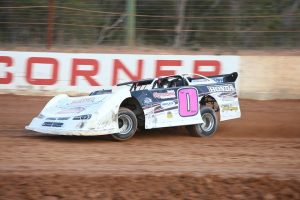 It has been an incredibly busy four weeks for the WA Late Model brigade with four meetings back to back, but this weekend heralds the end of that first stretch, with the division scheduled for a three week break upon completion of this Saturday night’s event at the Perth Motorplex.

Round Five of the XLI Pro Dirt Series is the next challenge ahead of the teams, doubling as the annual King of Kwinana event, and with twenty drivers nominated for the event this weekend, we are sure to see plenty of action across the night.

Heading the list is last start winner Ryan Halliday, who in his new Longhorn Chassis has been a tough one to beat, recording two feature wins already this season. Despite missing the opening round of the XLI Pro Dirt Series Ryan sits ninth in points and if he can finish towards the front once again this weekend, can be expected to move even closer to the leading pack.

Meanwhile, the battle at the top of the points table is already at fever pitch, with veteran Late Model racers Warren Oldfield and Brad Blake locked together with 429 points. Both have claimed a feature win, with Blake also featuring on the podium on one other occasion, while Warren has been there twice more. Both had an ordinary night at Manjimup last weekend and will be hoping to bounce back and bag another crucial swag of points.

Behind them are Jay Cardy and Michael Holmes also locked together, this time in the battle for third place on points, with 397 apiece, while Matt Goodlad is just two points behind them in fifth. Goodlad and Cardy have both scored two podium finishes thus far this season, while Holmes has yet to score one, and all three will be keen as mustard to race through and grab their first win of the season come Saturday night. 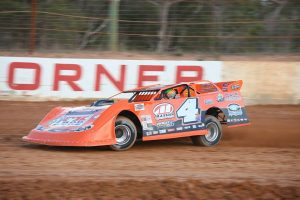 pre-season goals, will now be resetting his focus and concentrating on bringing home that win. Of course names like Lee Watt and Paul Stubber will also be looking to add another feature trophy to their cabinet, so Vosbergen’s task will be no mean feat.

‘Red Hot Roni’ Veronica McCann is in a race against time to get her car ready for this weekend’s event after some issues at Manjimup while names like Ryan Ludlow and David Nylander will be hoping to make up for not being able to start the feature race at the last Motorplex show.

Add in Jayden Meckenstock, who was a DNF at his last show, rookie driver Joe Chalmers in his first ever Late Model meeting, series top ten runners Daniel Ameduri and Mick Comley, and James Batley who has been getting faster and faster each time he hits the track amongst a whole host of others and it is going to be a very interesting race come feature time this Saturday night.

Will we see another repeat winner this weekend or will a new name break-through for their first win of season 2017/18? Be at the Perth Motorplex this Saturday night to find out!