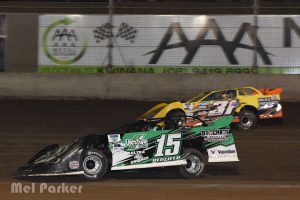 There has been very little time between events to start the season and Late Models are working hard and getting ready for another event at the Perth Motorplex on Saturday night, this time for Round Three of the Carbusters Pro Dirt Series.

The opening two rounds have been fantastic, with enjoyable heat races and of course epic finals which have resulted in two different winners and indeed, six different podium getters!

This Saturday night there have been eighteen nominations received, with a number of cars unable to make the short turn around after a bruising affair in the last round hurt a couple of engines.

Despite this setback, there is still a solid field of cars and any number that are capable of coming home with the win.

Series leader Michael Holmes has been consistently up the front of the field with two fourth places in the opening two rounds. Getting back on the podium is his number one priority, but a win is certainly the overall aim and he could go close this weekend. 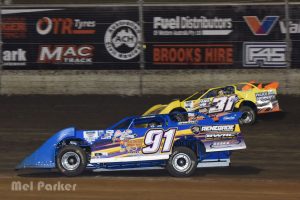 Paul Stubber is currently second overall, having come home with two fifth places despite showing some incredible car speed. He is being pursued by third placed Warren Oldfield (a second and a DNF), fourth placed Jay Cardy (two seventh places) and fifth placed Brad Blake (a win and a DNF), all of whom haven’t had the runs they completely desired and will be keen to get back on the podium, Blake in particular looking to back up his win in the last round and write his name into the history books once again.

Ryan Halliday and Marc Giancola are keen to back up- their podium finishes from the last show while Veronica McCann scored a great sixth place and Freddy Kinsella eighth place at the last show and are both also looking to further build on those results. Jason Bond also had a good run and will be one to watch as he gets more laps under his belt.

Nuno Mendes is a welcome addition to the field in his first race of the season while others including Kye Blight, Matt Amato and Daniel Ameduri are also set to re-join the thunder and lightning brigade after missing the second round. Amato’s fellow rookie Lee Redmond is also in the field and these five drivers will be keen to show what they are made of and make an impact come feature time Saturday night.

Also in the field will be Simon ‘Awesome’ McNab, set to be joined for the first time this season by Willy Powell, while Jayden Meckenstock will be hopeful of overcoming the issues that he struck in the last show that kept him off track all night.

It is set to be another huge show, with four heat races prior to the all important feature race in Round Three of the Carbusters Pro Dirt Series. Be at the Perth Motorplex this Saturday night!

Pics: These Mel Parker pics show the action that happens all over the track when Late Models race!