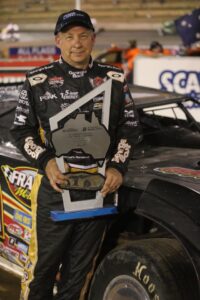 The Late Model Nationals enters its sixth year this weekend, so the time seemed right to turn the pages back and have a look at what’s transpired over the last few years!

The inaugural Nationals kicked off at the Perth Motorplex in the 2016/17 season with a two night show, American Steve Francis stopping the clocks with a 16.341 to top the twenty five car field in qualifying, then winning both his heats and the preliminary feature race to lead the points after night one.

Night two would see more of the same, with Francis winning his final heat, claiming victory in the knockout series and then winning the forty lap feature race ahead of fellow countryman Devin Moran and Craig Vosbergen.

The 2017/18 event would be scheduled to again be held over two nights, but with an unfavourable weather forecast, the decision was made to run the whole event on the Saturday night.

For the second time in as many years the Americans would set QuickTime, Jason Fitzgerald setting a time of 16.215 to defeat a thirty eight car field.

Fellow American Joe Godsey would be the only repeat winner across the eight heats but it was New South Welshman Ryan Fenech starting from pole alongside Fitzgerald, with Devon Moran and Joe Godsey starting on the second row to complete the visiting lockout of local drivers.

Fitzgerald would jump into the lead quickly and drove an incredible race to remain at the front at the end of the forty laps, with Tyler Erb coming from seventh to second and Kye Blight rounding out the podium.

The Sunday night show would eventually be able to go ahead but without the Nationals tag, Tyler Erb besting Paul Stubber and Kye Blight. 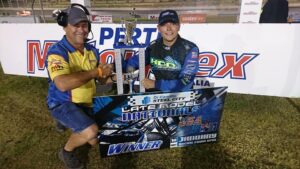 feature (behind winner Billy Moyer, Joe Godsey, Michael Holmes and Ryan Halliday), he would fight hard with the legendary Moyer and eventually go on to claim the win in the forty lap race.

Joe Godsey had set QuickTime on the first night in the twenty eight car field.

The following year would be a unique one for the Nationals, held in conjunction with the Australian Late Model Title.

Forty cars would compete, with Kye Blight setting the fastest time in qualifying on night one then winning the first of two preliminary features ahead of Craig Vosbergen and Brent Vosbergen, while the second preliminary went the way of Godsey ahead of Brad Blake and Warren Oldfield.

Blight would then put himself in pole position after he won the pole pursuit event, going on to lead every lap of the forty lap feature and take the win ahead of Craig Vosbergen and Warren Oldfield.

Last years Nationals event was scheduled to be run over three nights, with the first round at Ellenbrook, followed by a midweek show at the Motorplex before the finale on the Saturday night again at the Motorplex.

Warren Oldfield claimed the Ellenbrook show ahead of Jason Oldfield and Joe Chalmers, but the midweek show was cancelled, leaving just the Saturday night to determine the Nationals winner.

For the second year in a row Blight would win the feature race, but it only happened after multiple lead changes and brilliant precision driving by the lead cars. 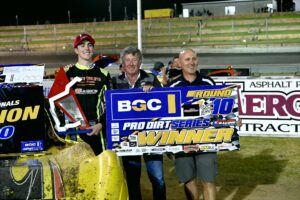 Blight would come from position fourteen on the grid, passing early leaders Brad Blake and Warren Oldfield with only a handful of laps remaining to claim the win from Blake and Oldfield in the thirty lap feature race, the first time the event was held over this distance.

So, with five years in the books, it’s time to add another page to history, and with Blight the only previous winner in the country, it will certainly be interesting to see if someone new can add their name to the list or if Blight becomes a three time champion!!