The Perth Motorplex will this weekend host the first round of the USA vs WA Late Model Tour, doubling as the two night Late Model Nationals.

Although previously released that there were twenty six cars, we are now pleased to reveal that there are now twenty eight nominations for this huge event with the addition of Jai Mazzini an 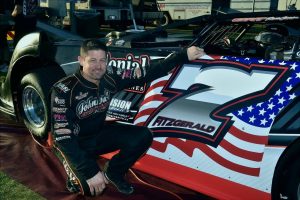 With such a huge field, and the fact that it is not a regular Pro Dirt round, the format will be slightly different.

On the opening night, Friday, all Late Models will come on track for an engine start before being sent infield. Each driver will then compete in one of four groups of hot lap qualifying.

These qualifying sessions will be combined on times and used to split the drivers into three heats per round, with the fastest going from the front in heats one, two and three, then a complete invert and row swap for heats four, five and six. Each driver will receive two heats, each of ten laps.

Night two, the Saturday, will see all drivers again receive an engine start before receiving hot laps in their heat groups. From here all drivers will compete in one more round of heats (three heats in the round), again of ten laps each.

The combined totals of night one points and the night two heat points will then set the grids for a top ten series of two by two knockouts, while those qualifying in positions 11 – 28 on points will compete in a Midpack Madness event for their starting positions in the main event.

Twenty four cars will start the feature, with the option of a promoter’s choice starter also in the mix, with the winner of the 40 lap feature race being crowned the Late Model Nationals champion.

It is going to be a lung buster of an event, so make sure you are at the Perth Motorplex this Friday and Saturday nights!

Photos thanks to Peter Roebuck