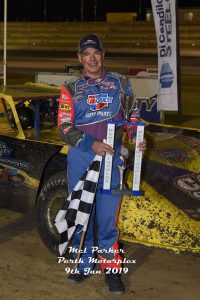 Billy Moyer has tonight achieved another career first, this time winning a feature race on Australian soil, the 836th of his illustrious career, at the Perth Motorplex for night one of the Di Candilo Steel City Late Model Nationals.

Moyer was all class throughout the event, the first of two nights of action for the Nationals and doubling as the first of four nights for the Di Candilo Steel City USA vs WA Invasion Tour, but was matched by fellow countryman Joe Godsey who set a new Track Record in qualifying, came second in his opening heat and then came flying through the field to win his second heat and set up a pole position start for the thirty lap feature.

By comparison, Moyer was second in qualifying (also going under the old one lap record), won his opening heat and then came fourth in his other to start from position three: local Brent Vosbergen having the best night of his career so far to grab the outside pole starting position after being third in qualifying, then winning a heat and coming second in the other.

As the feature race went green, Godsey got the initial jump but Moyer came from nowhere and snuck through on the inside to grab the lead with Vosbergen slotting into second and Godsey dropping back through the pack.

It all amounted to naught though as second night rookie Aydan Trewern spun and a pile of cars including Cameron Pearson, Chris Pavlovich, Veronica McCann and Warren Oldfield all piled in.

The incident eliminated four of the cars, Oldfield the only one able to restart.

On the second attempt at the start Godsey again got the jump as Moyer attempted to do the same as the first time, but was unable to make it stick and this time it was Vosbergen dropping back through the pack.

Moyer then moved to the highline immediately, and grabbed the lead from Godsey as Michael Holmes then began to make his presence felt, looking for a way past Godsey on the inside for second.

As Moyer began to pull away, Godsey, Holmes, Tyler Erb and Marc Giancola began to battle it out in close quarters for third. Behind them Paul Stubber was attempting to pick his way through the field but ended up going straight into the turn four wall to bring out the caution lights with four laps completed.

Moyer would lead the field away with Godsey and Holmes in hot pursuit. Giancola would hold off Erb for fourth place but Ryan Halliday and Kye Blight were quickly on the scene as they too looked for a way through. Again the race would only get three laps in, this time as McNab found himself finding himself facing backwards on the back straight to bring on the cautions.

It was during this time that Marc Giancola would also head infield while running fourth. 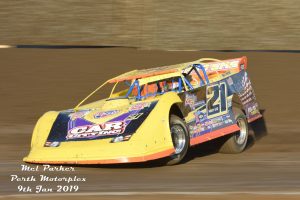 As the race went green again, Moyer raced away with Godsey in hot pursuit as Holmes began to feel the pressure from Halliday and Erb. At this time cars also began to head infield quickly, with firstly Joe Chalmers, then Jamie Moon, Jai Mazzini and Warren Oldfield all retiring within a few laps.

Back on track and as the laps wound down, the top three began to pull away and the rest of the field spread out, seeing Moyer get into lapped traffic on lap fifteen.

With ten to go Moyer had nearly a 2.5 second lead, working his way through lapped traffic as Godsey and Holmes dropped further back, Erb and Halliday still fighting it out for fourth place.

With two to go Moyer lapped seventh placed Jeff Roth, and had a lead of nearly eight seconds, then went on to cross the line in first place, some 8.696 seconds ahead of second placed Godsey, with Holmes in third. Halliday got past Erb for fourth with Kye Blight in sixth place the only other car on the lead lap.

Earlier in the night saw Joe Godsey fastest in qualifying, with the old one lap qualifying track record being lowered twice, and the top three cars all going under the old mark.

Heat racing saw Erb, Moyer and Vosbergen all claim wins in the first round of heats while in the second round Erb claimed his second win, while Trewern claimed heat five in what was just his fourth ever Late Model race with Brent Vosbergen coming from last to second, while the final heat went to Joe Godsey after he stormed through the field from the very back.

Courtesy of tonight’s results, Godsey is the overnight point’s leader for the Di Candilo Steel City Late Model Nationals. He is just four points ahead of Moyer, while Tyler Erb rounds out an all American top three.

The Late Models now have a couple of days to refresh and repair before they hit the track again on Saturday night for the second and final night of the Di Candilo Steel City Late Model Nationals. Heat Grids will be based on the overall points thus far and will be released tomorrow, with Saturday night’s format seeing two more rounds of heats before the all-important forty lap final! 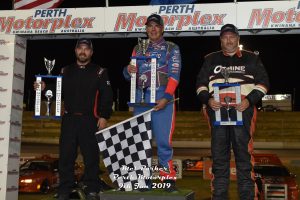