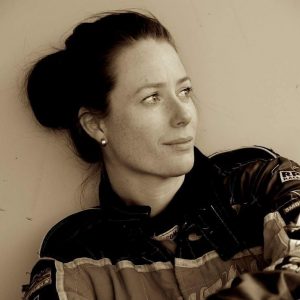 Veronica McCann is one of the most recognizable names in West Australian speedway, with her accolades stretching across nearly two decades and multiple divisions, from Junior Sedans and Sprintcars right to the present in Late Models.

During this period she has proven time and time again that her commitment to the sport and to furthering herself and her skills, as well as sheer determination can all band together to produce some impressive results. Something that she proved once again last season.

“It was my first season running the 525 crate motor so I was fairly apprehensive to get going to see how I sized up against the guys out here,” shared McCann. “I took a little bit to get warmed up, but we really started to come on from January and I was happy with our progress. We also ventured over to Warrnambool for my first interstate Australian Title; it’s hard to set goals for your first one so I went in really wanting to see where I stood on a national level in this division. We came out of that one with an 11th overall which on paper doesn’t look that awesome but considering I had to come through the B-main, I was happy to salvage that.”

Known as ‘Red Hot Roni’ to her legions of fans, Veronica is back to do it all again, committing to running the entire XLI Pro Dirt Series as well as the Di Candilo Steel City USA Invasion Tour in season 2017/18.

“I firmly believe we have the toughest weekly series in Australia,” she says. “Week in, week out you are being pushed by these guys to find that little something extra. After a six year break away from the sport I really struggled with confidence and to get comfortable racing again, plus I came in to a new division so as much as I have progressed last season I am still a long way off where I want to be, so I have a bit of work to do.”

Enjoying the travelling aspect of the sport, the team will also head across the border to Murray Bridge Speedway in South Australia to compete in the 2018 Australian Title.

“Those smaller tracks tend to take the horsepower aspect away from the competition which helps put me on a somewhat level playing field with my little motor so that title, like last season, is one I am really looking forward to.”

Taking into account the level of competition we have out West, the team has set themselves the goal of moving into the top five in the overall XLI Pro Dirt Series rankings. What makes the race team even more impressive is the fact that anything that happens within the race team is based solely on herself and her husband Carl’s efforts: in McCann’s own words, if she doesn’t make it to a race meeting then that responsibility falls on her hands. Of course, she is very quick to speak highly of Carl, saying how fortunate she is to have someone in her corner that works their tail off.

“What goes on in this team is all Carl and myself, we don’t have any help away from the racetrack as far as maintenance and preparation goes,” she says. “Carl comes from a Motocross background and I have Sprintcar background so we essentially knew nothing about these cars a couple of years ago and when you first look under a dirt Late Model these things are almost overwhelming with adjustments. Carl quickly took it upon himself to learn as much as he could and take on the role of crew chief for me, so on race nights I am able to concentrate on actually racing the thing.”

This worked well last year, not just with on track results, but also with Carl being one of the recipients of the Crew Chief award from the LMRAWA, showing that his efforts have certainly not gone unnoticed.