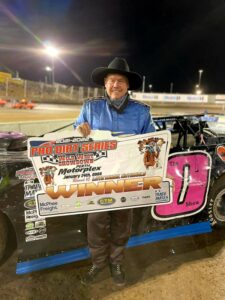 It was a huge night for Late Models at the Perth Motorplex, with some drivers returning to form, some competitors scoring their best ever finishes, two even scoring first time podium appearances and one very special record set! 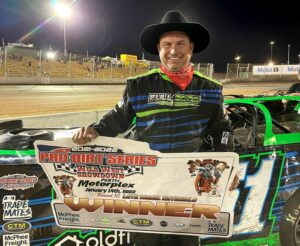 There were plenty of stories across the night, with teams suffering mechanical issues and finding MacGyver like fixes, teams coming together to help each other and a number of cars ailing but able to continue throughout the evening.
The night began with qualifying, with Paul Stubber setting the fastest time, prior to six heat races being contested earlier in the night, with Stubber, Matt Goodlad (Daytona Racing), Warren Oldfield (Oldfield Racing), Freddy Kinsella (Team Green Racing), Veronica McCann (Veronica McCann – Red Hot Racing) and Joe Chalmers (Team BCM Motorsport:) all claiming a win.
Points were calculated across heats and qualifying, with drivers then split into odds and evens for two feature races.
Feature race one saw Matt Goodlad and Brad Blake starting from the front row and as the race went green, Goodlad went low, Blake high, the duo side by side.
Behind them Joe Chalmers used the highline to move to third after starting from position six and passing both Jay Cardy (Cardy Racing Components) and Warren Oldfield. Cardy would fight back, but at the end of the first lap it was Blake leading Goodlad, Chalmers, Cardy and Oldfield.
Blake looked to pull away but couldn’t quite shake Goodlad who was still being pressured by Chalmers while behind them Oldfield was now pressuring Cardy for fourth.
Oldfield passed Cardy for fourth on lap eight, then as the field came around to complete lap nine Chalmers spun in turn three, cars going every which way to avoid him.
Luckily no one got caught up and the race would restart, Blake leading away, with cars going everywhere once again as they jostled for position in a massive pack. Goodlad would grab second once again and Veronica McCann dove through a number of battling cars to scream through into third place.
McCann then went around the outside of Goodlad to steal second with only a few laps remaining, while Chalmers was back up to fifth after going to the rear and was looking for a way past Oldfield.
Goodlad looked back by McCann in the dying stages, but couldn’t quite make the pass, giving Oldfield the opportunity to get back by him for third.
A lap later Chalmers also passed Goodlad, but up front it was all Blake, going on to claim a record setting thirty eighth Perth Motorplex feature race win, now giving him the outright most wins in the venue’s history.
Oldfield would get McCann on the line for second, with McCann holding on for third in her first Pro Dirt Series podium finish. Chalmers and Goodlad would round out the top five. 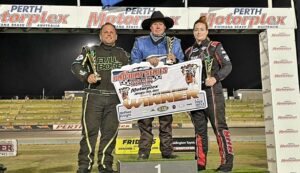 The second feature saw Paul Stubber and Jamie Oldfield (Oldfield Racing) sharing the front row ahead of Brent Vosbergen (Team Vosbergen Racing – TVR) and Rod Musarra (Rod Musarra Racing #12).
Immediately as the race went green the front cars went three wide for the lead, Vosbergen low, Stubber in the middle and Oldfield high, with Jamie grabbing the lead ahead of Stubber and Vosbergen.
Stubber drove into the turn four wall on lap two and slowed, dropping to the rear but staying on track.
Back up front, Oldfield opened up a big gap on Vosbergen with Rod Musarra settling into third ahead of Daniel Ameduri (Ameduri Motorsports), Freddy Kinsella, Michael Holmes (Michael Holmes Racing), Jason Oldfield and Stubber. 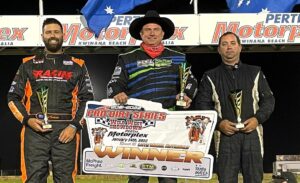