Skip to content
After some time out of the seat, Ken Macpherson has today made a statement in the latest round of the Formatel 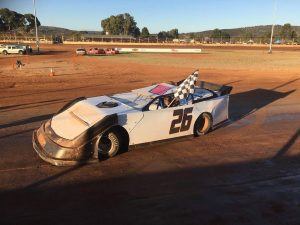 Winter Series for Late Models, claiming two heat wins and then leading every lap in the feature event.

Macpherson led from pile position as the race went green while Michael Holmes came from the second row to be in second place.

Clint Marriott fought back and grabbed second place but then made a mistake coming out of turn four which allowed Holmes to duck back by for second.

By now though Macpherson had pulled out to a decent lead and Holmes was left to chase him, the duo both setting some very quick times as the laps wound down.

In the end though the gap was just too big and Ken Macpherson raced away to grab the win from Holmes while David Nylander, who was holding down third place, spun in the final turn, allowing Clint Marriott to grab third while Nylander was unable to cross the finish line.