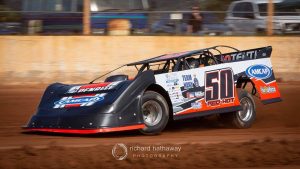 Quite obviously, one of the focuses for Late Models over recent seasons has been growth, something that we as a committee believe has been achieved, but is also something that we as a club will continue to work on.Now though, we are looking more to the long term growth of speedway racing, and Late Model racing in particular, and it is to that end that we are proud today to announce a very special Junior Development prize.

Junior Sedans quite literally are the future of our sport, and if you look through the Late Model ranks today you can see many of our drivers who started in Junior Sedans including Jamie and Warren Oldfield, Daniel Ameduri, David Nylander, Jayden Meckenstock, Jai Mazzini, Jarrin Bielby and of course Red Hot Roni, Veronica McCann just to name but a few.

It is to that end that McCann, in consultation with Paul Stubber and the JSRA have decided to work towards encouraging Junior drivers to move into the Late Model ranks after their Junior Sedan career finishes.

“I was instantly on board when Paul (the General Manager of LMRWA) mentioned this to me,” says McCann. “I was given a similar opportunity when I was at the end of my Junior career, so for me this is a way to pay it forward.”

The idea is simple: two prizes will be issued to Junior Sedan drivers at the completion of the season. One will be based on merit; essentially the winner of the Junior Sedan series or the person with many feature wins or who has put in a series of outstanding performances, whichever is more applicable. The second prize winner will be voted on by a LMRWA panel, including of members from the JSRA, essentially someone who is adjudged ‘Most Deserving’.

“As a former Junior competitor myself, I know firsthand that taking the step into a senior division can be both overwhelming and a little tough to choose a suitable category,” says McCann. “There is currently nothing in place to foster the growth of speedway racing and this gives a couple of opportunities to deserving winners to test a Late Model without having to purchase one.”

The prize for these two winners will be as follows. Two cars will be available (The #31 of Paul Stubber and the #50 of Veronica McCann). The winning drivers will receive 2 x 10 lap runs at a test session, the date and track of which remains to be decided, but will be held at the end of the summer season, either at Kellerberrin or Pithara Speedway’s.

On top of these prizes, many of the drivers in Late Models, including Veronica and Paul, are incredibly approachable and very happy to talk with any drivers and parents who are genuinely looking to head in the Late Model direction after Juniors, so don’t be shy, make yourself known to them and have a chat!

This is a massive initiative for Late Models, Junior Sedans and Speedway in general, so we wish all Junior Sedan drivers the very best of luck and will post updates and reminders throughout the season of what could potentially be a life changing prize for two lucky winners come the end of season 2018/19! 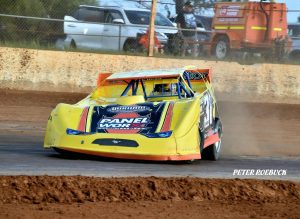