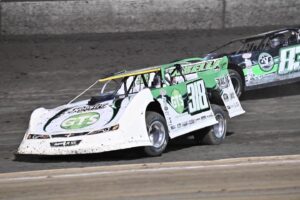 This weekend is a bit of a different one for the Late Models as they get the chance to compete at the Perth Motorplex without the pressure of the Pro Dirt Series.
Indeed, this weekend is simply about two things. One, points for the Perth Motorplex Track Championship, two, getting that elusive feature race win.
One man who put in a great performance at the last show was ‘Fast’ Freddy Kinsella (Team Green Racing). A heat race win and a fifth qualified him out of position three in the final, but he was an unfortunate DNF after showing plenty of speed. With a bit of luck Freddy could well repeat and improve on those results this weekend.
Richard ‘Big Sexy’ Wells (CTM Recruitment Racing) also had a solid run last weekend, coming home with an eighth place in the feature, something that pleases the CTM Recruitment team. Week after week they have been plugging away, getting laps under their belt and Wells is now at the point where he records consistent laps and generally stays out of trouble, so more top ten results are sure to follow. 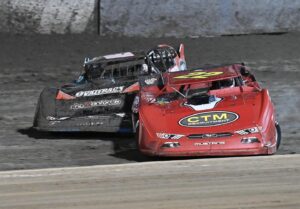 Jamie Moon ran a special paint scheme at the last show, honouring his late father John. Unfortunately it didn’t quite go to plan for Moon, recording a sixth and a seventh in his heats but ultimately unable to take his spot in the feature race, something he will look to correct this Saturday night.
Peter Mewett has been working hard to get on the pace and will continue his efforts this weekend while Luke Halliday is also back in the field and keen to bounce back from a tough showing last time out. They will be joined by Nathan Richards and Pat Van Brakel who also return to the field this weekend.
The Kalgoorlie crew are also making their way to the Motorplex for this one, with David Boyes (Boyes Motorsport), Shaun Cubbage and Damian Hudson all nominating. Hudson has had two Super Speedway runs so far this season, coming home with a twelfth and a sixteenth in the feature races, while Boyes has an eleventh place finish and Cubbage is making his first Motorplex appearance of the season. The ‘Kal Krew’ always enjoy coming to Kwinana Beach and would love to take a trophy or two home to reward their efforts.
Jason Oldfield (Oldfield Racing) and Joe Chalmers (Team BCM Motorsport:) return to the field this weekend after missing the last show, joined by Veronica McCann (Veronica McCann – Red Hot Racing) and Daniel Ameduri (Ameduri Motorsports), and all have all been right on the pace this season, so if things go a little more this weekend they could again turn their results into podium finishes.
Also in the field are last start winner Kodee Brown (McCorry Brown Racing Team), place getters Brent Vosbergen (Team Vosbergen Racing – TVR) and Warren Oldfield (Oldfield Racing) and regular front runners Jamie Oldfield (Oldfield Racing), Jay Cardy (Cardy Racing Components) and Michael Holmes (Michael Holmes Racing), so we know it’s going to be another battle: the outcome of which could go any which way!
See you this Saturday night with on track action kicking off from 5pm, while we also have a number of drivers slated to compete in the FAST
Racing Series also at the Perth Motorplex this Friday night!
Release by DTN Media.
Pics Courtesy Peter Roebuck.
Official Nominations – 20
4 Brent Vosbergen
7 Shaun Cubbage
07 Kodee Brown
11 Jason Oldfield
15 Warren Oldfield
22 Richard Wells
23 Joe Chalmers
31 Pat Van Brakel
50 Veronica McCann
51 Jamie Oldfield
52 Jay Cardy
55 Peter Mewett
71 Jamie Moon
74 Nathan Richards
80 Damian Hudson
83 Daniel Ameduri
90 David Boyes
91 Michael Holmes
94 Luke Halliday
318 Freddy Kinsella
#latemodels #lmrwa #perthmotorplex #superspeedway #kwinanabeach #kalkrew #competitors #winning
Posted in news
Scroll To Top