For the second season in succession, the Late Models will be again stripping their tops in the running of the ‘Show Us Your Steel’ Topless Late Models Presented by Di Candilo Steel City. 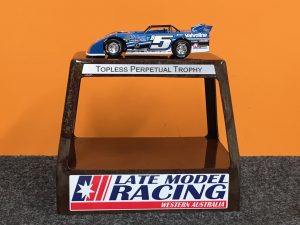 Based around the Comp Cams Topless 100, a Late Model Crown Jewel event at the Batesville Motor Speedway in Batesville, Arkansas.  The event’s unique format, featuring dirt late models without a roof, gives spectators an up close look as drivers wrestle their 800+ horsepower machines around the Perth Motorplex.

The 30 lap feature race winner’s cheque has been increased to $3000 to mark the importance of the occasion so there will be a big field of fiercely competitive Late Models. The $3000 pay day also makes it the biggest pay day in the LMRWA calander, and to top it off the winning driver will be the second winner of the impressive perpetual LMRWA Topless Trophy won last year by Jamie Oldfield.

The event, presented by Di Candilo Steel City is in acknowledgement of the continued support John Di Candillo and his team have given Late Model Racing in Western Australian since their exception.

On Saturday March 18, Late Models will be getting set and ready to, ‘Show you their steel’ in what is set to be a great concept and an event drivers look forward to for years to come.