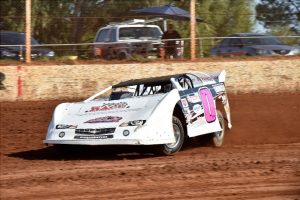 For the first time this season the Late Model Sedans will return to Bunbury Speedway as they compete in the first round of the track championship this Saturday night.

A solid field of twenty two cars has nominated for the vent which doubles as round four of the Racin’ Tyres and Accessories Pro Dirt Series.

Headlining the nominations once again is last start winner Warren Oldfield, who grabbed the win in the Magic Man 34 feature race last weekend.

Oldfield has been in sensational form so far this season, grabbing a win in the opener at Ellenbrook, following it up with a second place in the Motorplex opener, then a win last weekend. Oldfield is in sensational form and will certainly take some stopping.

Another driver in good form is that of Jay Cardy, having grabbed two second place finishes already this season. Cardy was the meat in an Oldfield sandwich last show and this time around he is desperate to get in front and claim the win.

Also in the field is Jamie Oldfield who also claimed another podium finish to add to his win a few weeks ago, so he too will be hoping for another strong result.

Lee Watt had a solid run last weekend and will be hoping to repeat that while Marc Giancola was just off the podium and will be looking to finish better than that this time around.

Other names like Brad Blake, Paul Stubber and Ken MacPherson didn’t get the results they were after at the Magic Man, so will be hoping for redemption this weekend, while Jason Bond and Jai Mazzini have both nominated once again for their first hit out of the season.

Racing gets underway this Saturday afternoon, so get your backside trackside!