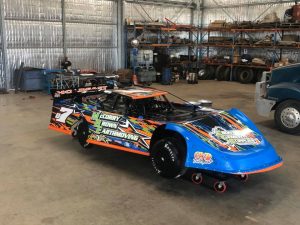 This Thursday night marks the last chance hit out for Late Model drivers to get laps under their belts at the Perth Motorplex prior to the big one, the Australian Late Model Championship, doubling as the opening rounds of the USA Invasion Tour, to be held on January 8th and 11th, 2020.

It is for this reason that there is a huge twenty nine Late Models nominated for the Thursday night Boxing Day Bonanza Showdown, doubling as Round Eight of the Carbusters Pro Dirt Series.

As if we needed more reasons to be excited, we can also confirm that two Americans, in Joe Godsey and Jeff Roth, have also jetted down under early once again and will be part of the field on Boxing Night.

The duo has been heading down early for a number of years now, both last year qualifying for the feature which was unfortunately cancelled due to fence damage. The year previous, Godsey was again here for this show, qualifying fifth for the feature but unfortunately not finishing. With plenty of track knowledge now and the removed stress of having to send cars down under, the American duo are in the best position they have ever been in to record their greatest result Thursday night.

‘The Highlight’ Kye Blight claimed this event two years ago and after also claiming the last feature race held at the venue in spectacular fashion, certainly comes in as one of the pre event favourites. With a renewed focus after some time on the sidelines, Blight is keen to get back to his spoiler destroying best and put everyone on notice again this week that he is one to watch.

Brad Blake, Warren Oldfield, Paul Stubber and Marc Giancola have all claimed feature wins already this season and have been consistently right on the pace. Stubber podiumed at the Motorplex in the last show after leading a number of laps and between them, the four drivers have claimed 9 podium finishes this season, along with a total of 85 Perth Motorplex career feature wins, a tally that could well be added to again this Thursday night.

One man who is also familiar with being in victory lane at the Perth Motorplex is Jamie Oldfield and after sitting the Late Model season out so far as he races in another division, is an exciting inclusion for the show. Jamie claimed this Boxing Day event three seasons ago and with eighteen feature wins to his name at the venue would love to claim another and remind all the competitors that come title time, he will be a real threat.

Michael Holmes on the other hand, despite leading the overall Carbusters Pro Dirt Series points and the Perth Motorplex Track championship, can’t quite get the feature win this season. Four podium finishes though show he is oh so close and this week’s show could be when he breaks through for that win and further extends his series points leads.

Although he has only competed in two shows this season, Ken Macpherson will also be one to watch aboard his new #26 machine. He returned at the last show with a fourth place, and added to his previous third place in the opening round, means he has a very good feature average finish this season. Looking even further into his results, from four heat races he has two wins, a second and a sixth place, so is definitely an exciting talent and could grab another good result this Thursday night.

‘The Black Knight’ Ryan Halliday returns this weekend for the first time since mid-November and he will be looking to make an impact from the get go, while the excitement for the Boxing Night show keeps building with the return of another former National Champion in Kodee Brown. The team has been working hard in recent months and although hitting the track a little later than they had planned, Brown should be quick straight out of the box in his brand new XR1 Rocket #07 and is sure to get the fans on the edge of their seats!

Add in a whole host of others looking to get the most benefit out of the final hit out prior to the Title, including Veronica McCann who has been recording some excellent results in the last few shows and look very racy, Jay Cardy and Freddy Kinsella who hold down fifth and sixth respectively in the Pro Dirt Series points, Daniel Ameduri who looks to have sorted all the car issues out after a crash at Bunbury and David Nylander who appears faster than ever in his Infinity Air & Solar #54 machine amongst many others and we are sure to have yet another epic event.

On behalf of all the drivers, teams, officials and management if the LMRWA we wish you all a very Merry and Safe Christmas and look forward to celebrating the festive season with you this Thursday night, Boxing Night, at the Perth Motorplex! 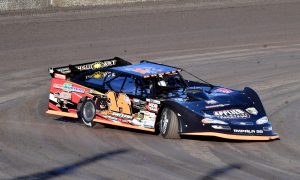 Pics: Twenty Nine Late Models will fight it out, with former Australian Champion Kodee Brown making his first appearance in a fair while, with Americans Joe Godsey and Jeff Roth also back in the field. Pics Peter Roebuck, McCorry Brown Racing page.