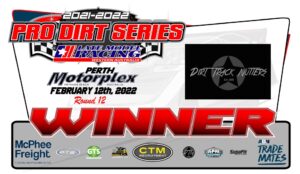 After a bit of a break, the Late Models will finally return to action once more this Saturday night!
The break was well received, with drivers using the time to rest, recoup and refresh after what was an intense few weeks of racing throughout the beginning and middle of January.
Now we reset and refocus on the Pro Dirt Series, the twelfth round of which will be held this weekend at the Perth Motorplex, proudly presented by the team at Dirt Track Nutters.
This event will be another special one, with Sedan legend Tony Giancola also being honoured by the Late Models this weekend. Tony, father of former Australian Late Model Late Model Champion Marc Giancola, won five WA Sedan Titles in his career as well as one Australian Championship (Grand Nationals).
Tony won a total of 35 sedan feature races at Claremont between 1978 and 2000 and was inducted into the Claremont Speedway Hall of Fame in 2000, and will fittingly be honoured this weekend at the Perth Motorplex.
We have a solid twenty-one car field nominated for the event with names like Brent Vosbergen (Team Vosbergen Racing – TVR), Warren Oldfield (Oldfield Racing) and Jay Cardy (Cardy Racing Components) set to pick up the battle for supremacy once again. Vosbergen holds the series lead currently with 1212 points, with Warren seventy six points further back in second and Cardy another eighty four points further back. All three will be fighting hard to get back at the front this weekend.
Jamie Oldfield (Oldfield Racing) and Daniel Ameduri (Ameduri Motorsports) are just on the outside looking in, their consistent seasons being rewarded with current positions inside the top five. Jamie recorded a feature win a few weeks back but isn’t content to rest on that success, while Nudge has recorded a best finish of fourth so far this season and would love to get back on the podium. 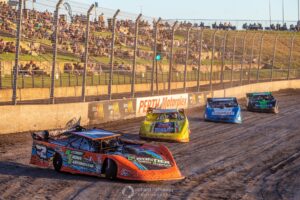