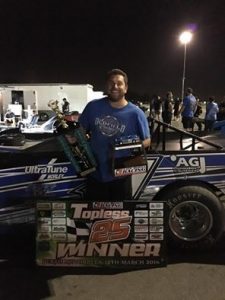 Jamie Oldfield last night proved how much he loves being topless as he dominated the night to win both of his heat wins and the Topless 25 feature race at the Perth Motorplex.

With all the drivers competing with no top on, Oldfield was clearly in his element, making every post a winner and leading every lap of the feature race to record a fine win.

Running topless must be something that the Oldfield family enjoys immensely, as younger brother Warren claimed a second and a third in his heats before coming home second in the feature race.

Brad Blake was holding down second place in the early going, but Kye Blight would change that on lap fifteen as he took over the position.

With eight laps to go Jay Cardy and Jayden Meckenstock would come together, leaving Cardy facing the wrong way and setting up an eight lap restart.

Despite the restart, Jamie Oldfield led away and was never headed, with Warren Oldfield coming home second while Kye Blight was officially third.

Earlier heat wins would go the way of Jamie Oldfield (2), while Kye Blight and Craig Vosbergen would also each win a heat race.

Courtesy of their podium placings in last night’s event, Warren will continue to lead the Pro Dirt points, while Jamie has shifted into a clear second place. Kye Blight is still in close contention behind Jamie in third, while Cardy is still in range with just a handful of rounds remaining. 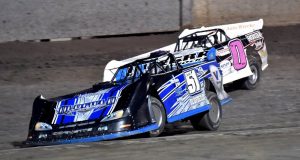