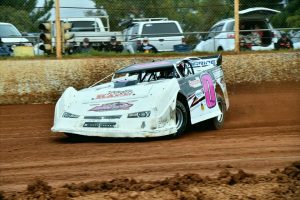 After another long off season, the time has finally come for the thunder and lightning Late Model Pro Dirt Series to finally hit the track once again and as has been the case for many seasons now, the opening round will be held at Ellenbrook Speedway, doubling as the Ray Tulk Memorial.Ray and his wife June were awarded Life Membership of the RDA of WA back in 1981 after having played a huge part of shifting the RDA from Wattle Grove Speedway to Ellenbrook. Ray was also one of the founding members of the Late Models, serving in a number of positions including as Treasurer and in Technical. Sadly Ray passed away in 2004.

This Saturday, the 13th of October, will see the annual event held, with an exciting nineteen car field nominated, including two former winners. Brad Blake claimed this event last year in sensational fashion, getting his season off to a strong start and the 0 Show will be keen to repeat his efforts as he looks to take the Pro Dirt Series crown out.

Jamie Oldfield is the only other former winner of the event nominated, and despite limited seat time in Late Models in recent years, can still be expected to put in a strong performance and be running towards the front of the field.

Jay Cardy came home second overall in the Pro Dirt Series last season, something he is desperate to avoid repeating this season, the number one spot well and truly in his sights. The team has been working hard in the off season and are ready to hit the track running, while Michael Holmes, Paul Stubber and Kye Blight are also hoping to start their seasons off with a bang. All four of these drivers are genuine contenders for the win on Saturday and if a little bit of luck goes their way, they will be hard to beat.

Of course they will challenged by a snarling field of Late Models, none more so than the returning Marc Giancola. The former Australian Champion has taken some time away from the sport but is now set to return with a vengeance, aboard the immaculate #43 machine, previously driver by Tyler Erb to victory in last year’s USA Invasion Tour. With this level of talent and equipment, Giancola is sure to be right towards the pointy end.

Ken Macpherson and Peter Seaton are also returning to the seat after some time out from the Pro Dirt Series, as is Rob Wells and Mick Andrews in a well presented two car team and all four will be looking to get laps under their belt and be back on pace in the shortest time possible.

Red Hot Roni, Veronica McCann has unveiled a whole new look and new sponsorship from Team Navy in recent weeks and now is time for actions to speak louder than words as she looks to improve on her career best season in 2018. McCann has been steadily improving and knocking on the door of a podium finish for a while now, so it is only a matter of time before she breaks through.

Also back in the field are Ellenbrook locals Mick Comley and Daniel Ameduri, who fought it out tooth and nail all last season for the Rookie of the Year honours, while Brent Vosbergen was also a standout and will be hoping to continue that form into the new season. Add in rookie driver Freddy Kinsella, the ever improving Jayden Meckenstock, Simon McNab who claimed a feature win at Ellenbrook a few weeks back and Joe Chalmers who recorded a series of solid finishes last season and we have a crack field ready for action this weekend.

With so many drivers able to lay a legitimate claim to the win this weekend, it is quite simply going to be one not to miss. Make sure you are at Ellenbrook Speedway this Saturday, with gates open from 12pm and racing from 3pm!

Photos: Brent Vosbergen, Mick Comley and Jay Cardy will fight hard this weekend, Aidan Skraha Photo, while Brad Blake will be hopeful of winning the opening round for the second year in a row, Peter Roebuck Photo. 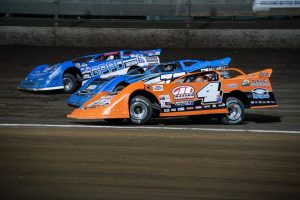