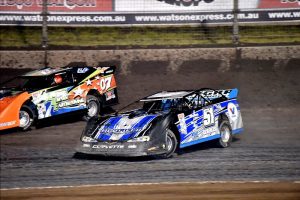 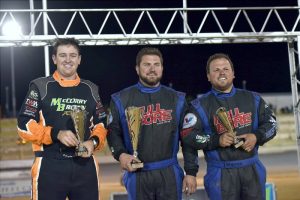 Jamie Oldfield has tonight begun his Christmas celebrations in the best way possible as he claimed the twenty lap Christmas Cup feature race at the Perth Motorplex.

Jamie was the equal high point’s scorer with brother Warren and would start on pole position, a place he never relinquished, despite being challenged on a number of occasions.

The race began with Jamie leading Warren, while Kodee Brown was in third. Shortly after, Brown was able to maneuver past Warren to grab the second place and then set out after Jamie. The top three pulled away from the rest of the field and despite being the meat in an Oldfield sandwich, Brown held his own and pressured Jamie for a number of laps.

By lap eight they had made their way into traffic, where Jamie was able to open up some breathing space while Warren tried to work past Kodee. With fifteen laps in the books, the first and only restart of the race would occur, with Veronica McCann finding herself stranded in turn four.

The restart gave Brown another chance a Jamie, but again Jamie pulled away. Behind the leading trio, Kye Blight was working the highline while most of the rest of the field was staying low.

On lap eighteen Mick Clune lost a wheel, but with the banking of the track the wheel quickly rolled infield and Clune was also able to pull off safely without bringing out the cautions.

The last lap saw Brown have one more go at Jamie, but it simply wasn’t enough, with Jamie Oldfield defeating Kodee Brown and Warren Oldfield, while Marc Giancola snuck into fourth at the last possible moment from Kye Blight who was forced to settle for fifth.

Earlier in the night the Late Models put on some spectacular racing, with heat two in particular seeing fans on the edge of their seat as there were three and four car battles throughout the field for the entire distance. Warren Oldfield, Jamie Oldfield, Jay Cardy and Kodee Brown shared the four heat wins.

Late Models return to the Perth Motorplex just after Christmas for the Boxing Day Bonanza, but the next round of the Racin’ Tyres and Accessories Pro Dirt Series won’t be held until Bunbury Speedway on the 9th of January, 2016.

On behalf of all the drivers and teams behind the Late Models we would like to wish you and yours a Merry Christmas and a Happy New Year! 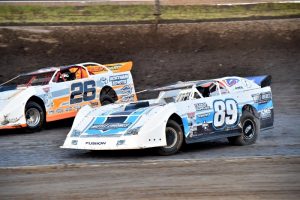