The Christmas period is well and truly upon us, but right now the biggest news is that there are twenty nine of the awesome Late Models nominated for a massive Boxing Day Showdown at the Perth Motorplex!

Yes, that’s right, twenty nine cars have nominated for action, including a number of returning stars and even two familiar names from other divisions who will make their Late Model debuts! 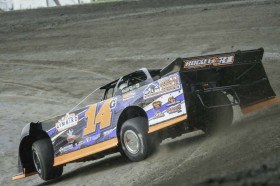 As if that wasn’t sweet enough, adding something extra to whet your appetite, is the nomination of American racer Joe Godsey who has headed to Australia early in preparation for the Late Model Nationals at the Perth Motorplex on January 13th and 14th and the ensuing USA Tour!

Godsey, the grandson of legendary competitor Ray Godsey Snr and son of Ray Godsey and hailing originally from Edinburg, Indiana, will be racing with teammate Jeff Roth for the USA tour, the duo having had machinery shipped out to Western Australia which will be picked up from the docks tomorrow, ready to meet up with them. Godsey is due to fly into Australia tomorrow and will use his early arrival to get some laps under his belt at the Perth Motorplex venue. 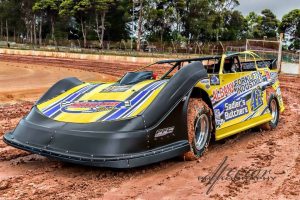 Although the American import is sure to garner plenty of interest, there are three other names making their season debut this weekend that are set to get tongues wagging.

Jamie Oldfield has been setting the Sprintcar scene alight in recent months and will this weekend return to the seat of his beloved Late Model. Always a tough competitor, Jamie would drive a shopping trolley given the chance and this weekend, stepping back into his first love, Late Models, he will be confident of a good result.

Meanwhile, fellow competitor Kye Blight is also making his season debut and now set to run with a brand new 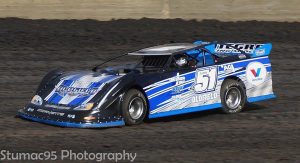 Longhorn Chassis and engine package, Blight is sure to turn some heads and be quick right from the get go.

The third competitor that has everyone talking is long time Super Sedan stalwart Gary Higgs, who will be making his ‘re’ debut aboard the ex-Kodee Brown machine. Higgs has been doing laps around Speedway circuits all across Australia for longer than he cares to remember and after previously dabbling in the division in its infancy, back in the late 90’s, has decided that now the time is right for the team to move back into the Late Model ranks and see what they can achieve. Looking at Gary’s history of success, one would be forgiven for thinking that it won’t be long before he is grabbing more good results, this time in the Late Models.

Of course, despite these drivers all making their first appearances of the season, there is still a whole host of other drivers who have been competing week in, week out and who aren’t about to lay down for these extra drivers to come in. Names like Ryan Halliday, Brad Blake and Warren Oldfield have all claimed feature wins thus far in season 2017/18, while XLI Pro Dirt Series regulars in Matt Goodlad, Jay Cardy, Michael Holmes and Veronica McCann are all knocking on the door of a win, and what better way to grab their first than by breaking through against a twenty nine car field?

Paul Stubber and Craig Vosbergen have made sporadic appearances thus far throughout the season, but every time they have hit the track they have shown just how quick they are and are a serious threat to the win on Boxing Day, while others like rookie drivers Mick Comley and Daniel Ameduri have also been improving with every meeting and could be a threat to some of the front runners.

Add in Nuno Mendes, also making his first competitive appearance in Late Models, Paul Joss who returns to action for the first time this season and a whole slew of other drivers and this Boxing Day Bonanza is set to go off with a Bang!

Have a Merry Christmas, stay safe and don’t party too hard, because we have a Boxing Day Bonanza for you to attend! Woooo yeah!