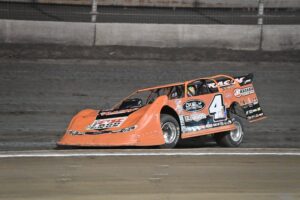 After a massive season of racing at a number of venues over what will be sixteen grueling nights, it all comes to a head this weekend at the Perth Motorplex in the final Pro Dirt Series round of the 2021/22 season, proudly presented by ABN Trade Mates!
Sixteen nominations have been received for Saturday nights showdown, which will also double as the annual Gold Cup event.
Brent Vosbergen (Team Vosbergen Racing – TVR) comes into the show in the box seat ready to claim his first Pro Dirt Series and also etch his name onto the Gold Cup trophy for the first time in his career. If he is able to complete the feat it will secure him the Pro Dirt Series points and also match his father Craig’s Gold Cup victory way back in the 2005/06 season.
The only man close to Vosbergen is three time Gold Cup winner Warren Oldfield (Oldfield Racing), sitting just 120 points behind 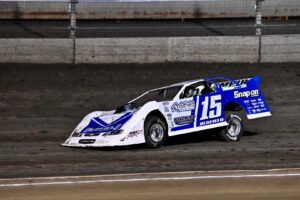 Vosbergen, which means mathematically Oldfield can steal the crown, but only if Vosbergen doesn’t show up and if Warren wins both his heats and the feature race!
The real battle is for third and fourth, with Jay Cardy (Cardy Racing Components) currently holding down third on 1399 points and Veronica McCann (Veronica McCann – Red Hot Racing) on 1380 in fourth, just nineteen points difference and plenty of ways that gap can be closed. Mathematically Jamie Oldfield (Oldfield Racing), who currently sits fifth and is also a three time and defending Gold Cup winner, could also manoeuvre his way into third but would also need a fair but of luck to go his way. 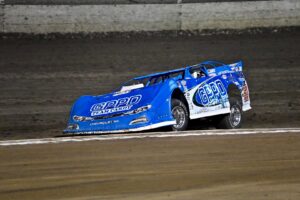 Brad Blake (2006/07) and Paul Stubber (2016/17) are the only other former Gold Cup event winners in this weekend’s field and would love to get another trophy for their cabinet, while we also have an interstate flavour to this weekends show, with New South Welshman Ross Nicastri also on board for Saturday night.
Michael Holmes (Michael Holmes Racing) and Rod Musarra (Rod Musarra Racing #12) are looking to solidify, if not improve on, their current top ten standings in the Pro Dirt Series while Joe Chalmers (Team BCM Motorsport:), who has been on a tear in recent weeks, will also be hoping to move his way into the top ten standings.
This weekend also marks the final round of the Perth Motorplex Track Championship, with the standings much the same as the Pro Dirt Series, Vosbergen again leading Oldfield while McCann has a three point buffer on Cardy in third place, with Jamie Oldfield back in fifth, again with points on the line.
Every lap of every race and ever position will be vital this weekend, so make sure you are trackside this Saturday night for a massive show!
Release by DTN Media.
Pics Courtesy Peter Roebuck.
Official Nominations – 16
0 Brad Blake
4 Brent Vosbergen
N6 Ross Nicastri
15 Warren Oldfield
18 Matt Goodlad
21 Rod Musarra
22 Richard Wells
23 Joe Chalmers
31 Paul Stubber
50 Veronica McCann
51 Jamie Oldfield
52 Jay Cardy
82 Matt Amato
90 David Boyes
91 Michael Holmes
94 Luke Halliday
Late Models Gold Cup History
2000/01 Ben Ludlow
2001/02 Ryan Halliday
2002/03 Ryan Halliday
2003/04 Craig Nylander
2004/05 Not Held
2005/06 Craig Vosbergen
2006/07 Brad Blake
2007/08 Warren Oldfield
2008/09 Not Held
2009/10 Brad Ludlow
2010/11 Ryan Halliday
2011/12 Not Held
2012/13 Not Held
2013/14 Not Held
2014/15 Jamie Oldfield
2015/16 Jamie Oldfield
2016/17 Paul Stubber
2017/18 Warren Oldfield
2018/19 Warren Oldfield
2019/20 Cancelled due to Corona Virus
2020/21 Jamie Oldfield
Posted in news
Scroll To Top