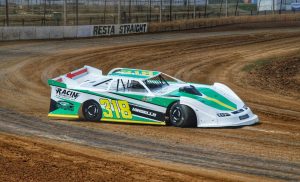 After what was an epic opening round of the 2019/20 Carbusters Late Model Pro Dirt Series, the second round, to be held at the Perth Motorplex season opener as part of the Shannon’s Powerpalooza, is sure to be another lung buster!

A good field of twenty one drivers have nominated for the event this Saturday night, with a number of additions from the opener a fortnight ago.

Heading the field is of course WA Champion and winner of the opening round in Brent Vosbergen. Currently on a bit of a hot streak with strong results at the tail end of last season, Vosbergen knows what it takes to win at the Perth Motorplex and will be keen to visit the top step in victory lane once again, but as always, he will be challenged by a snarling pack of contenders.

Vosbergen was chased home by Warren Oldfield and Ken Macpherson in the opener, both of whom are currently on different ends of the scale with regards to wins at the Perth Motorplex: Oldfield with nineteen feature wins at the venue while Macpherson is yet to taste main event success. Of course, this counts for nothing on Saturday night and both are capable of improving on their round one results come feature time.

Brad Blake is the winningest driver in Late Model history at the Perth Motorplex and is hopeful of moving even further ahead of his rivals this weekend while others including Kye Blight, Paul Stubber, Jay Cardy and Marc Giancola have also had victories at the Motorplex venue previously and will be keen to repeat those efforts.

Michael Holmes is another who fits into this category, but comes into this event with a bit more expectation on his shoulders, defending not only the Pro Dirt Series but also his Perth Motorplex Track Championship win. Holmes was right on the pace in the opening round, qualifying from pole position before finishing fourth in the opener and is a real chance of regaining the top spot come feature time.

Ryan Halliday is another who has claimed many feature wins before and the former Australian Champion is a huge addition to this weekends field. ‘The Black Knight’ will be joined by David Nylander, aboard a brand new car this season, Jamie Moon, Jayden Meckenstock, Nathan Callaghan and Jason Bond as those who were absent from round one and will be having their first runs for the season on Saturday night. 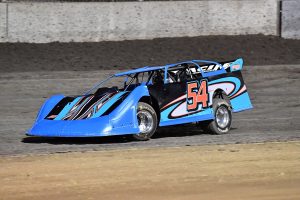 ‘Red Hot Roni’ Veronica McCann, rookie Lee Redmond and Winter Series winner Cody Avins will all be hoping to turn their luck around after a rough run in the opening round while names like Simon McNab, Joe Chalmers and Freddy Kinsella had up and down runs in their first hit outs and will be looking for more consistency this time out.

As has been the case for a number of seasons now, Late Models are set to steal the show once more and with such a quality field, one can only guess who will come out on top!

Pics: The opening round of the Motorplex season always produces some great action! Peter Roebuck Photos.