The Di Candilo Steel City USA Invasion tour is mere days away and although there is a lot of hype surrounding the five visiting American drivers, there are also four interstate competitors who are travelling across the Nullabor to be here on the West Coast and they certainly aren’t doing that just to make up the numbers.

One Victorian and three New South Welshman are making the trip West for the series and all have a lot of credentials that could see them as real threats across the four nights of competition. This includes multiple feature wins across the group, not to mention three of the drivers finishing in the top four in the overall New South Wales point scores last season.

Cameron Pearson is the sole Victorian competitor, though will be travelling over as part of a two car assault with 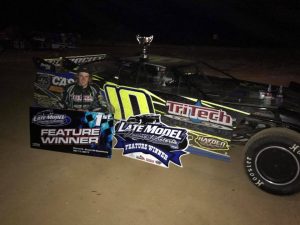 American Tyler Erb piloting the team’s second car. Pearson has travelled to Western Australian in the past, as has New South Wales representative David Doherty, the last time both competed two seasons ago in the National Title.

Pearson was unable to advance past the B Main on his last attempt in WA, while Doherty came home fourth in his two opening night heats and fifth in his preliminary feature before striking dramas on the second night.

Things have changed since then, with Pearson scoring a win last month at Rushworth in Victoria and then a second place at Premier Speedway a week later aboard his V#10 machine so is certainly in form while former Australia #2 and NSW Late Model Champion Doherty has been having some good finishes in his new N#25 Longhorn machine and hearing about the recent domination of Longhorns here in the West, will be keen to make his own impact. 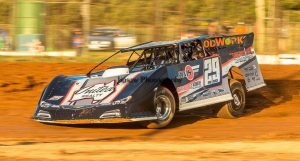 Ryan Fenech, also from New South Wales, is making his first appearance in Western Australia and despite being at new tracks this is not expected to detract from his results. Fenech rounded out 2017 with two feature race wins in Sydney, at Valvoline Raceway, on the 31st of December and previously at the opening event of his season in October.

The young gun has been setting the Late Model scene on fire over East and will be hoping to continue that form (and avoid more rainouts) over here in the sunny West aboard his XR1 Rocket N#29 machine. 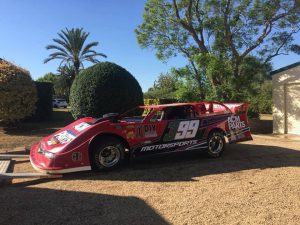 Ben Nicastri is the final interstate visitor and is another who has previously raced at the Perth Motorplex. Nicastri, a former New South Wales, South Australian and Victorian Title holder, has a unique position, being the only visiting Australia driver (along with American visitor Steve Francis) who holds a Late Model track record at the Motorplex, having set the one lap record for qualifying. This was set back at the 2015/16 Australia Title, Nicastri recording a 15.978 almost two years ago to the day (15th January, 2016).Nicastri came home twelfth in the feature race at that event and has recently scored a string of podium finishes at Valvoline Raceway in Sydney. This time, driving his Barry Wright Race Cars N#99 machine which is also sporting a new wrap, he will be keen to record some more good results at the venue this weekend and again in the final two shows next weekend, making the 3,900km trip worthwhile.

All four teams are now on the road, with most hoping for a chance to practice on Wednesday night at the Motorplex ahead of the four nights of action.

This Invasion Tour will also give all four drivers the chance to test themselves against some of the Nation’s best in preparation for the Australian Late Model Title.

The Title, to be held at the Murray Machining and Sheds Murray Bridge Speedway on the 2nd and 3rd of February

is set to attract a number of entrants from here in the West and considering we have some of the strongest week to week competition in the nation, is an opportunity for our visitors to see where they are at in preparation for the title and to suss out some of the competition!