Joe Godsey was quite simply born to race.

The grandson of the legendary competitor Ray Godsey Snr and son of Ray Godsey, the name Godsey name has been synonymous with winning in race cars for many decades. Joe’s grandfather, Ray Godsey Snr began his racing career in the 1960s and is a member of the National Dirt Late Model Hall of Fame.

Now, Joe Godsey himself competes, and has been doing so for a number of years with distinction. 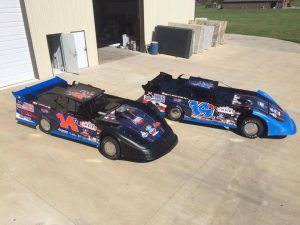 In an interview from therepublic.com in June, 2016, Godsey was asked if it was difficult living up to the Godsey name. Joe replied:

“I have raced from Australia to North Carolina, and when they see that last name Godsey, they asked if I am related to Ray. I used to work on my grandfather’s race cars when I was 5 or 6 years old. I am proud of what he has done for me and the entire family on and off the track.”

“He still goes to the races every week. He won a ton of races. I asked him once how many races did he win, and he said, ‘I am not sure, but I can tell you how many times I finished second.’ That just goes to show you how competitive he was, and that has continued on today with the rest of the family that race.”

The younger Godsey, originally of Edinburgh, Indiana, began his racing career in 1994 running a Bomber car he built himself. Over the years he has raced for names like Tony Stewart, winning Track Championships and feature events in the UMP Modified division as well as championships and a number of races in the Super Late Models.

He was this season’s Rookie of the Year for the MARS West Dirt Car Series (along with a second place finish on overall points after a charging run in the second half of the season with eight Top-5’s and 11 Top-10’s) and now, it has just recently been announced the Godsey will be competing for the Sunoco Rookie of the Year Title in 2018 as part of the Lucas Oils MLRA.

Godsey has actually been to Western Australia once before, way back in 1998 when the Late Models had only just burst into existence here, and it has been almost two decades since his last trip down under.

It is an exciting turn of events that has Godsey coming back to Australia and being joined by teammate Jeff Roth to compete here in Australia in a schedule that, along with the Boxing Day Show next Tuesday, will see them both competing in the Di Candilo Steel City Late Model Nationals at the Perth Motorplex on the 13th and 14th of January, as well as the final two USA Tour rounds at QUIT Collie Speedway and Albany Speedway on Friday the 19th and Saturday the 20th of January respectively.

The duo, bringing out their own cars, spares and other equipment as part of Roth Motorsport, will be based out of local competitor Simon ‘Awesome’ McNab’s workshop and truck, something that McNab himself is excited about.

“This summer steps up a notch at Team 19. Action man Webb Dillard of Dirt on Dirt fame is flying in with an array of equipment and these guys are so serious they’re bringing a 40’ container of Rocket XR1’s, spares and equipment. The summer of ‘18 is going to be like no other, with more than a little help from our friends!”

Perth Motorplex Speedway Manager Gavin Migro is equally impressed that Godsey is in town and ready to take on WA’s best.

“It is such a thrill to have Joe here” he said. “The son-of-a-gun is a great addition to an already strong field for the Boxing Day show and we look forward to having him and the rest of his fellow countrymen here for the Di Candilo Steel City Late Model Nationals in January also!”

With all his equipment just about ready to go, and Godsey himself arriving in Perth on Thursday, all the pieces to the puzzle are starting to match up and after a few laps around the high banks of the Perth Motorplex, Godsey will certainly be one to contend with!

Pics Courtesy of Team 19 – The Roth and Godsey cars preparing for the big trip down under.