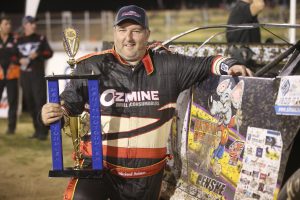 With just one race left in the season Michael Holmes has tonight claimed another feature win at the Perth Motorplex and due to his closest rival Marc Giancola heading infield, Holmes has also taken back the overall lead in the Sims Metal Management Pro Dirt Series.

A good twenty one car field would start the race but it was reduced very quickly when a first corner incident saw Freddy Kinsella, Cody Avins, Paul Stubber, Simon McNab and Jason Bond all eliminated from the race, the field lining up again ready to restart with sixteen cars.

The second attempt at a start saw Holmes and Giancola side by side through the opening turns, Holmes diving underneath and leading the first lap from Giancola and Blake.

Brent Vosbergen, Warren Oldfield and Ryan Halliday were the next best cars, the top six pulling away from the rest of the field.

Back up front, Giancola caught Holmes and used the lowline to draw level, the two spending a couple of laps side by side before Holmes again gained the advantage.

By this time Halliday had made some moves and was in fourth, hunting down Blake.

Lap ten saw Holmes into lapped traffic but it didn’t slow him any, able to pull away from Giancola who in turn was able to open up a big gap back to third placed Blake as Halliday came under pressure by Vosbergen for fourth.

With seventeen complete though disaster struck, Giancola slowing and heading infield, his series hopes all but dashed.

This would leave Holmes nearly half a lap in front, and he was never headed from here, going on to claim the win from Blake and Halliday.

The Late Models have just one more race for the season left, coming up in less than one hour, and with Holmes off pole alongside Brent Vosbergen, the points battle is going to be very, very interesting, with Holmes now holding a slim twenty three point lead over Giancola, with Brad Blake a further four points further back. 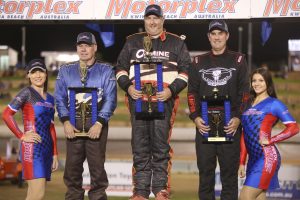 Contingency Awards (Round 7 Race Only)