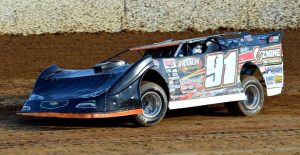 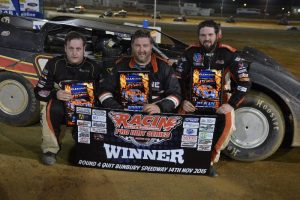 Michael Holmes has survived all comers to race away and claim a solid feature win last Saturday night at Bunbury Speedway.

Holmes outlasted not only attrition on the track, but also thunderstorms that were circling the track throughout the latter part of the night as he raced away to claim the feature from Collie local Paul Joss, with Jay Cardy racing his way into third place.

The feature began with four cars failing to start: Brad Blake had issues from the Dash that weren’t fixed while Veronica McCann, Jamie Moon and Alex Melvin were also unable to join the field. Lee Watt was the first to retire, quickly followed by Jamie Oldfield who was leading the race for the opening stanza, retiring on lap nine, with engine failure.

The race restarted and this time it was Kye Blight who led away the field, with Marc Giancola and Michael Holmes chasing hard. For six laps it remained this way until a caution on lap fifteen saw Giancola retire at the same time as Morgan Melvin and Jayden Meckenstock.

This left eight cars remaining but that was quickly reduced shortly after when Warren Oldfield retired after sitting in third place, with axle failure. At this stage Blight was still leading but he too would head infield on the very next lap, handing the lead to Holmes.

From here Holmes would pull away , while Ken MacPherson sat in second, with Paul Joss in third. A the laps wound down Joss made his way past MacPherson for second, then Jay Cardy came from nowhere to grab third, with the order not changing from here, Holmes winning the feature over Joss and Cardy.

MacPherson, Paul Stubber and rookie Jason Bond rounded out the only other finishers.

Earlier in the night heat wins went to Jamie Oldfield, Lee Watt, Ken MacPherson and Brad Blake while he A Dash was taken out by Lee Watt. The B Dash was then cancelled due to a lack of numbers able to take the green.

Looking at the Racin’ Tyres and Accessories Pro Dirt series points it is Warren Oldfield who leads after four rounds, some twenty one points clear of Jay Cardy, while Jamie Oldfield sits a further sixteen points behind in third.

The next round of the series will be this weekend at QUIT Collie Speedway, so stay tuned for all the latest news and results from there.

B Dash – Declared a no race