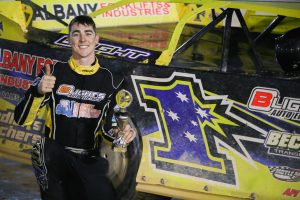 As the feature race went green, nineteen of the original twenty one starters would be on track, just Wayne Coleman not making it out, while Jayden Meckenstock would pull off before the race officially got underway.

Blight would immediately race away into the lead, and would actually set his fastest lap of the race on the opening lap as Brent Vosbergen, Kodee Brown, Warren Oldfield and Joe Chalmers were in pursuit.

By lap three Blight was already into traffic, while Brown would make his way into second ahead of Vosbergen. 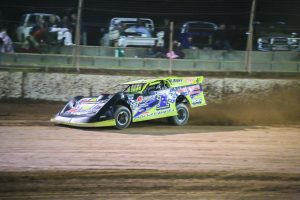 The traffic just got thicker for Blight but he worked his way through with ease, only stopping when the yellow lights came on for a spinning Simon McNab, by which time he had already lapped nine cars. Kodee Brown was still second at the restart, followed by Vosbergen, Oldfield, Aydan Trewern, Chalmers, Godsey, Daniel Ameduri and Hayden Ross as the only other cars still on the lead lap.

The yellows would come out four laps later as Wade Carter spun, with Freddy Kinsella also involved, and both would finish their nights on the infield, but back on track Blight would once again race away, as Aydan Trewern made the most of the restart to get by Oldfield for third.

Prior to the stoppage Vosbergen had also made his way past Brown for second, with Brown then dropping to fifth as Trewern and Oldfield also passed him.

The next twenty seven laps would run without incident, as Blight raced away and continued to lap through the field, while Vosbergen held off a determined Trewern and Oldfield. Brown was holding down fifth but he too went down a lap before ultimately retiring on lap thirty, while Oldfield grabbed third placed from Trewern on lap thirty three, just a couple of laps before Trewern too was lapped before heading infield just shy of taking the checkered flag.

When all was said and done, Blight would officially take the win from Brent Vosbergen and Warren Oldfield as the only three cars on the lead lap, while Daniel Ameduri held strong to finish fourth one lap down from Joe Godsey and Hayden Ross, while Michael Holmes, Jay Cardy and Veronica McCann were two laps down filling positions seven to nine, with Jeff Roth and Brad Blake rounding out the finishing field three laps down. 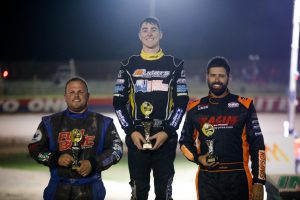 Excitingly, we do it all over again tonight, with the final round of the Invasion Tour taking place at the Albany Speedway once again and as last night showed, the Late Models certainly know how to put on a show! 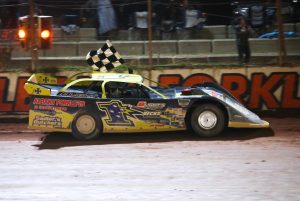