After the massive success of last weekend’s Di Candilo Steel City Late Model Nationals, the travelling circus that is 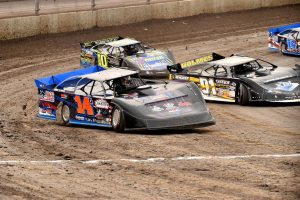 In continuing the trend of our big fields for season 2017/18, we are today proud to reveal that we have a solid twenty nine nominations for this Friday Night Showdown, featuring five Americans, four interstate visitors and a whole cast of the fast from way out West!

Leading the Series after two nights is American Tyler Erb, who after running second in the Nationals feature and then leading every lap of Sunday night’s main event, has a six point buffer on nearest rival Paul Stubber. Obviously heading to new tracks has done nothing to harm ‘Terbo’s’ chances of success and the Pearson Motorsport team will continue to give him all he needs for another chance at victory.

Paul Stubber opened his Invasion Tour campaign with a fourth place finish and then improved to come home second in the Sunday night feature. He fought it out tooth and nail with fellow West Aussie local Kye Blight both nights and the duo have certainly been the talk of the town after their performances last weekend. Both improved their results on the Sunday night from Saturday and will hope to continue that improvement, and in the process move up the overall Invasion Tour stats where they currently sit second and fourth respectively.

Jason Fitzgerald is currently third in the standings and after a standout win in the Nationals feature before a fifth place on Sunday night, is just three points behind Stubber in third. The Halliday Racing team have given him everything he needs for success and he is certainly one to watch out for across this coming weekend.

Devin Moran broke through for a solid fourth place on Sunday night, while fellow American Joe Godsey has been up the front at every race so far and were it not for some bad luck could have been much higher than ninth in the overall standings. His teammate Jeff Roth has also been consistently going about his business and all three Americans will be looking to impress this weekend.

Another one of those drivers who has had a rough time so far is New South Welshman Ryan Fenech. On opening night while running in second place, the team broke a rear end which resulted in a broken transmission and ended their night early. Returning to compete on Sunday, the team then detonated an engine which looked set to end their tour out West prematurely until the amazing Pearson family came to their rescue and lent them their backup motor for the rest of the Invasion Tour. Pearson himself hasn’t had much luck, getting involved in a crash in the opening night feature and then blowing a tyre on Night Two, so hopefully the good karma will make a return to the likeable Victorian and Fenech in the process!

Ben Nicastri and David Doherty are the other two interstate visitors and have both been going quietly about their business. Nicastri came ninth in the Sunday night feature after a DNF the night before, while Doherty claimed an eleventh and a seventh, both of whom are now primed and ready to get some more runs on the board this weekend.

Looking at some local hopes and Warren Oldfield, Craig Vosbergen, Michael Holmes and Matt Goodlad have had some consistent results thus far, but will not be content with those and are determined to make more of an impact this time round while Collie competitors Paul Joss and Ken Melvin will be keen to use their home track knowledge to benefit them.

All of these drivers, not to mention a whole host more will be heading to Collie this Friday night, but for now the questions still remain. Will we see a third different winner in as many rounds? Will an Australian finally breakthrough for that elusive Invasion Tour feature win? Who will take the points lead into the final round at Albany on Saturday?

Be at QUIT Collie Speedway this Friday night!