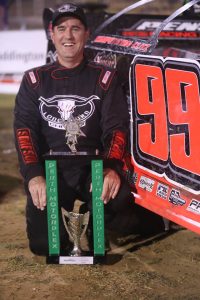 Ryan Halliday has tonight won the opening event of the Perth Motorplex season, doubling as the second round of the Sims Metal Management Pro Dirt Series, in a thrilling twenty five lap feature race and in the process reset a track record.Halliday was all class throughout the night, setting QuickTime in his group and then winning his heat to start on pole for the twenty lap feature race. From here he led every lap and despite some incredible and intense challenges from behind, he was able to hold on and record his fourteenth feature win at the Perth Motorplex and in the process grab the twenty five lap record, bettering the old mark by some two minutes (the original record had stoppages).

As the feature race went green, Halliday would lead away Kye Blight and Marc Giancola, with Brad Blake hot on their heels. Giancola went high and Blake went low as they fought side by side while behind them Paul Stubber moved into fifth and the top five began to pull away from the rest of the field.

Stubber moved under Blake for fourth but couldn’t make the move stick on lap four, then two laps later he shifted to the outside and this time the move stuck. Meanwhile ahead of them Giancola caught Blight and moved inside him, the two making contact but able to keep going, Giancola then moving past Blight as they fought their way through lapped traffic.

Up ahead, leader Halliday then got baulked with traffic which in turn allowed Giancola to close that gap, while behind them Stubber also passed Blight and all of a sudden it became a three way battle for the lead between Halliday, Giancola and Stubber.

Stubber made the move on Giancola in turn two, then the two came together in turn four, Stubber spinning but able to keep going and with cars going every which way to avoid him, he only dropped back to fifth and the green lights stayed on in the second incident between the two in as many feature races.

This allowed Halliday some breathing room, but Giancola again pegged back the lead and lapped traffic would continue to play its part, Halliday going high and Giancola low as the duo fought it out for the lead, Halliday always able to just keep the nose in front.

Eventually Halliday with five to go split the middle on two lapped cars that had hampered his progress, but Giancola again stayed with him and this time Blight and Stubber both caught up to create yet another four way battle for the lead. 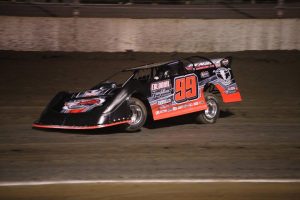 In the final two laps it was anyone’s game, with drivers high, low and in the middle of the track as they hunted for the win, but in the end Halliday held on while Stubber made a last corner pass to grab second, Blight in third and Giancola coming home fourth in an incredible race that saw Late Models well and truly steal the show, the top four separated by less than a second.

The entire race went nonstop, setting a new record time of 7.09.005, bettering the old mark and in another huge positive aspect of the nights racing, all but one car finished the feature; Joe Chalmers the unfortunate one to not finish after slowing in the dying stages of the race as the leaders crossed the line. As if this wasn’t enough, Paul Stubber also reset the one lap qualifying record earlier in the night, making it a huge night for Late Model racing in Western Australia.

Of course, it is so exciting that this is just the beginning of the season and we still have plenty of action ahead of us in season 2018/19! Round three of the Sims Metal Management Pro Dirt Series will be held at the Perth Motorplex, just one week from tonight, on Saturday, the 3rd of November. 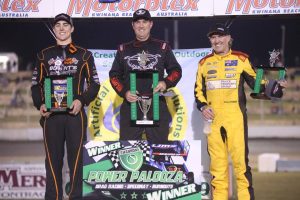