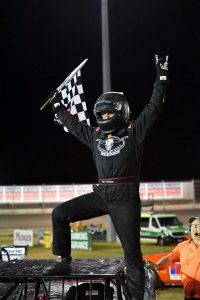 For the third time this season Ryan Halliday has stood on the top step of the podium, this time after claiming the win in a grueling twenty five lap feature race at the Perth Motorplex for the fifth round of the XLI Pro Dirt Series.

All nineteen cars that fronted for the nights battle were able to start the feature and despite there being piles of cars all over the track as the race went green, it was Halliday who jumped out to lead early from pole position, while fellow front row started Brad Blake threw everything he had at Halliday just to stay in contention.

Despite Blake’s best efforts Halliday began to pull away while behind them Daniel Ameduri, who was having the best night of his short Late Model career to start out of position four, and Warren Oldfield came together, with the end result being Ameduri’s bonnet flapping in the breeze, albeit on the right hand side and allowing him to continue after dropping a number of places.

Paul Stubber would begin to make an impact shortly after, moving into third and beginning to look for a way past Blake for second.

It didn’t take long for Halliday to make his way into lapped traffic, while Stubber finally moved into second on lap six and set out after Halliday, looking to close down the massive gap.

Lapped cars would play havoc with all three members of the top three, but they were all able to continue on and with about six laps to go, a few laps after Ameduri finally succumbed to engine issues and headed infield, Stubber had significantly closed the gap on the leader.

Stubber began to apply the blowtorch, pressuring Halliday until he could find a gap and finally his chance came, Halliday running ever so slightly wide and Stubber ducking underneath coming out of turn two to grab the lead with about ten laps remaining.

Unfortunately for Stubber, all his hard work came undone as the yellow lights came on for the first and only time in the race, for a stranded Jason Bond.

As the rulebook says, we go back to the last completed lap, which meant that Halliday was back in the lead, with Stubber on his tail while behind them Blake and Michael Holmes were having an epic battle for third place.

The leading duo would continue to battle, again catching lapped traffic quickly, one in particular which would slow them both up, Halliday going low, Stubber high, and the duo coming out of it side by side. Momentarily though, Stubber had a half lose coming out of four, but somehow continued to stick right to Halliday.

Lee Watt, who was at the time running fifth, then spun infield with a lapped car, ending his race, but up front it was Stubber again making the move for the lead only to spin to a stop in turn one.

Brad Blake only just avoided him as he came through, while Willy Powell and Brent Vosbergen ended up spinning to avoid him, cars spread across the track leaving Jay Cardy no option but to go high and collect the wall in the process. Only Stubber was unable to continue.

The race went green again with just four to go and Halliday would pull away once again, leaving Blake and Holmes to continue their battle, followed by Warren Oldfield, Matt Goodlad and Jay Cardy who was on a late race charge.

In the end though, Halliday was simply too good once again, grabbing the win from Blake and Holmes, who fought it out right to the line, while Oldfield would come home fourth, scoring enough points to now be tied at the top of the Perth Motorplex Track Championship tree, both drivers on 438 points, while Blake is currently third on 434 points. 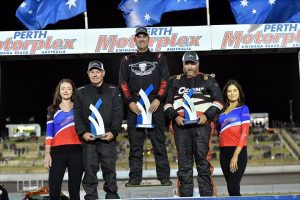 The win also marks the third time that Halliday has won the King of Kwinana event, not to mention it being his twelfth feature win at the Motorplex venue, elevating him into equal fourth on the all-time Perth Motorplex Late Model feature winners list, equal with Brad Ludlow and behind only Brad Blake, Craig Vosbergen and Warren Oldfield.

After a hectic four weekends of racing the Late Models in Western Australia will now enjoy a well-earned rest period, allowing them time to prepare for their return to the Perth Motorplex on the 9th of December for round six of the XLI Pro Dirt Series.