Ryan Halliday last night showed all and sundry that he is back and that he means business as he raced his way to a dominant win in the Powerpalooza feature race at the Perth Motorplex. 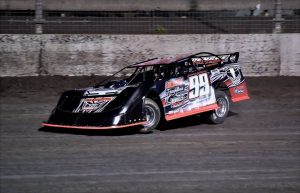 The event, rescheduled to Sunday after a Saturday rainout and doubling as round two of the XLI Pro Dirt Series, was also the Perth Motorplex season opener and attracted a solid field of twenty one cars, more than any other division.

With a new format for this show featuring two groups of qualifying before each of their heats, it was Paul Stubber who qualified fastest in group one while late nomination Craig Vosbergen would set the pace in group two.

Stubber would go on to win the first heat, which would make him high points man, while Halliday would claim the second, enough to see them both start on the front row of the twenty lap feature event.

As the race went green Stubber and Halliday were quick to go at it, both looking a little loose initially before Halliday went high in turn three and Stubber settled into the lead.

Just as the leading duo began to pull away the yellow lights came on with four laps complete for a spun James Batley who was stuck in turn three.

With the field all bunched up single file behind Stubber, the lights went green again and everyone took off…except Stubber who seemed to be fighting an ailing car all of a sudden. Somehow the entire field made it past Stubber with minimal contact, the yellows coming on again and Stubber heading infield, his race prematurely over.

On the restart Halliday would lead away while Warren Oldfield would make the big moves into second, passing Brad Blake. Craig Vosbergen was fighting hard behind them in fourth and only a few laps later Vosbergen would make his move past Blake who at the time was struggling with some lapped cars. This ended up in an uncharacteristic half spin for Blake who dropped back to eighth but managed to keep going. 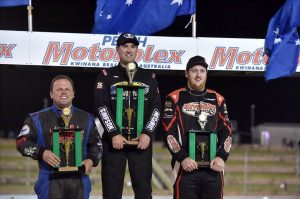 The race would continue, Blake trying to fight his way back through while Matt Goodlad and Veronica McCann were having a titanic battle for sixth. McCann was running the lowline while Goodlad was at the top, until Goodlad suddenly slowed to a stop on the back straight, bringing out the yellows with five laps remaining.

Under the yellows Vosbergen headed infield with a flat tyre, seeing Halliday now leading away Oldfield, Jay Cardy, Michael Holmes, Blake, McCann and Ryan Ludlow who had come from dead last in position twenty one to be seventh.

On the restart Halliday again pulled away with Oldfield in hot pursuit. Holmes and Blake were putting on a real show in the closing laps, Blake making the pass for fourth on the last lap, but up front it didn’t matter, as Halliday crossed the line to win his eleventh Perth Motorplex feature race and defeat Oldfield, Cardy, Blake and Holmes, with Ludlow passing fifteen cars to become the DTN Hard Charger in sixth place.

The Late Models now have very little rest as they return to action once again at the Perth Motorplex next weekend for round three of the XLI Pro Dirt Series.