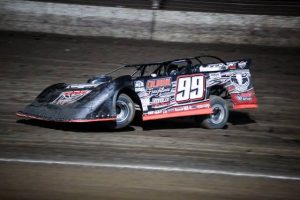 Ryan Halliday has once again returned to the top step of the podium, this time claiming the feature win at the Perth Motorplex, the thirteenth of his career at the track and defeating Brad Blake and Matt Goodlad in the process.

As the race went green pole sitter Brad Blake got the jump but it was Paul Stubber who worked the outside and took the lead while Warren Oldfield shortly after grabbed second place. Blake fought back quickly and retook the position, while Ryan Halliday then also applied the blowtorch to Oldfield and managed to sneak by for third place.

As the top three cars pulled away, Jay Cardy was next to arrive on the scene as he began to look for a way past Oldfield for fourth, an effort that was made more difficult by the fact that the lead five cars were already in lapped traffic.

Halliday snuck past Blake for second as first Comley, then Mazzini and finally Meckenstock all spun in turn two but all kept going, the green lights staying on. Stubber meanwhile was holding strong up front as Halliday began to stalk him, following him through lapped traffic and waiting for his moment to pounce.

Behind them Blake, Oldfield and Cardy were having their own battle for third, not just with each other in close quarters, but also with a number of lapped cars thrown in the mix the whole time. Eventually it all came to a head as Jayden Meckenstock and Mick Comley came together on the front straight, bringing out the first stoppage of the race with twelve laps completed.

Stubber led away the restart but it was Halliday who finally made his move, working the highline to perfection to run around the outside and grab the lead. Two laps later the yellows came on again, this time for Higgs who spun and was then hit by Chalmers, while Comley was also forced to throw his machine sideways to avoid them.

Halliday raced away at the restart while a lap later Stubber had a moment and went high, touching the turn two fence and allowing both Blake and Oldfield to duck by while Cardy drew side by side with him, the two then making contact and Cardy ending with a broken machine that resulted in a pile of cars crashing with him on the back straight including Simon McNab, Michael Holmes and Daniel Ameduri.

All four cars were eliminated from the race, with Halliday to once again lead away Blake, Oldfield, Stubber and Matt Goodlad with nine laps remaining. Halliday simply shot away while Goodlad was the man on a charge, passing Stubber and then one lap later chasing down and passing Oldfield for third place.

Goodlad continued his move forward, closing on Blake for second and spending the remainder of the race trying to make a pass, but he couldn’t make anything stick, Halliday going on to defeat Blake and Goodlad.

It would be Halliday’s fourth win of the season, while courtesy of the results, Warren Oldfield leads the Perth Motorplex Track Championship points by twenty four markers ahead of Michael Holmes and Paul Stubber. Full XLI Pro Dirt Series points will be updated tomorrow.

The next show for Late Models will be the two night event at Bunbury Speedway over the March long weekend as we support the Krikke Boys Shootout! Full details to be released in the coming days!