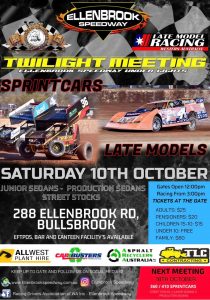 This weekend at Ellenbrook Speedway the 2020/21 BGC Pro Dirt Series for Late Models officially kicks off and with seventeen nominations received, it should be a cracker way to start the season.

The event, which doubles as the thirteenth annual Ray Tulk Memorial, has seen all the stars and their cars nominated, with defending Pro Dirt Series Champion Warren Oldfield heading the list. A four time winner of this race previously, Warren will be keen to kick the season off with a win and a recent second place run at his home track a couple of weeks ago (as well as running second in this event last year) sees him full of confidence.

He will of course be pressured by a number of other drivers, none less than Kye Blight and Michael Holmes. Blight, the current Australian Champion obliterated the field in his last heat race a fortnight ago before suffering engine damage and not finishing the day. He did the same at this event twelve months ago, so will be keen to make amends this weekend and show just how dominant he can be, while Holmes will be keen to get back to the form that saw him cement the 2018/19 Pro Dirt Series win.

Holmes will be guest driving the Jock Murray #20 machine as he waits for his own equipment to arrive in Australia, and a shake down run at Ellenbrook a fortnight ago in the car resulted in a feature win, which has also put him in good stead for Saturday night.

Former Australian Champion Paul Stubber is also in the field and after getting plenty of laps in the Winter Series, will be keen to kick his season off with a win also. He, along with veteran Brad Blake (who has claimed the Ray Tulk Memorial twice previously) will be hard to beat if everything falls their way.

Brent Vosbergen won this event last year, his first of three feature wins for the year, and he would love to add to that tally again this year. Brent will be running the #8 made famous by his father for this show, and with Craig also in his corner as crew chief, will be another tough one to beat.

Ken Macpherson finished third in this event last year, repeating his efforts from the previous year, and would love to repeat or improve on that result the third time around, while others like Jay Cardy, Daniel Ameduri and Veronica McCann are all capable of being right towards the pointy end come feature time.

Add in a number of rookie drivers including James Whately, Rhys Wells and Laura Byrnes, plus last year’s Rookie of the Year Matt Amato, as well as series regulars Joe Chalmers, Jason Bond and Rob Wells and we are sure to have an incredible opening night for the 2020/21 BGC Pro Dirt Series!

Racing kicks off from 3pm this Saturday, the 10th of October at Ellenbrook Speedway, with gates opening at 12pm. 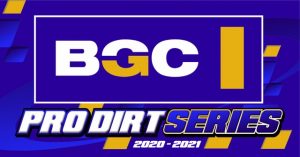