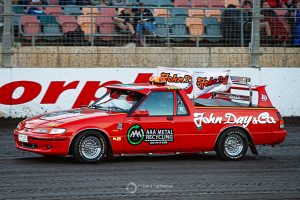 After a fortnight’s break, the 2020/21 BGC Pro Dirt Series roars back into life this weekend for Round Four at the Perth Motorplex and the action is only going to get better and better.

This Saturday nights event, doubling as the John Day Classic, will pay tribute to ‘The General’ John Day, a man that speedway drivers across all divisions hold in great esteem and the Late Model division will be doing the best they can to honour him.

A good twenty two nominations have been received for the event, with current points leader (and opening round winner) Warren Oldfield being joined by round two victor Brad Blake and last start leader Ryan Halliday in the field.

All three drivers are veterans of the division who have recorded multiple feature wins over the years (the trio are third, first and fourth respectively in all time feature wins for Late Models at the Perth Motorplex) and would love to add to their tallies this weekend: Blake to be the outright venue feature leader, Oldfield to claim a ten year winning streak at the venue and Halliday to claw within one win of overtaking Oldfield on the overall winners list. Can they do it this weekend or will we see a new winner? 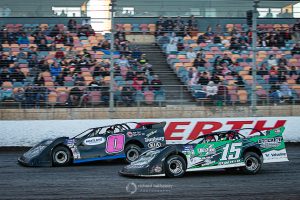 Any number of other competitors in the field could potentially claim the feature win, with former Australian Champions Kodee Brown and Paul Stubber, former WA Champion Brent Vosbergen, Michael Holmes and Jay Cardy all having tasted main event at the Motorplex previously and desperate for more.

Also on that former winners list are Jason Oldfield and Matt Goodlad, both returning this weekend. Oldfield will be campaigning the car that brothers Jamie and Warren both drove at the last show, his first show at the Motorplex since February earlier this year, while Goodlad is finally set to get back on track after some time out of the seat, then a rainout a few weekends ago extending his break even longer. Both have the talent and the equipment to grab the win, so it will be interesting to see how long it takes to knock the rust off before both are back on the pace.

Of course, there is a whole stack of drivers who have been knocking on the door of a feature win for a fair while now and this weekend could well be their chance to grab it. Names like Ken Macpherson, Veronica McCann, Matt Amato and David Nylander have been oh so close in recent years and could well break through Saturday night, while other including Joe Chalmers, Jamie Moon and Jason Bond have shown plenty of speed recently and could be dark horses.

Add in rookies Laura Byrnes, Nathan Richards and Brendan McKeagg (making his competitive debut in Late Models), as well as Kalgoorlie driver David Boyes and Matt Nylander who are both hoping for solid runs and we have all the makings of yet another lung buster.

Make sure you are trackside at the Perth Motorplex this Saturday night for all the action and to pay tribute to ‘The General’ John Day! 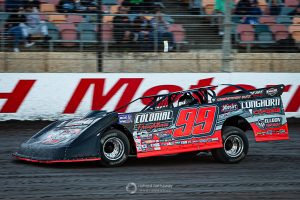