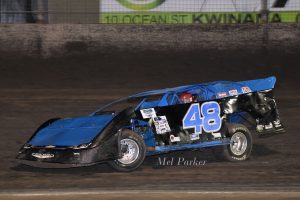 The 2019/20 season has been absolutely flying and this weekend, with the Late Models back at the Perth Motorplex, will mark Round Six of the Carbusters Pro Dirt Series!

Heading the nomination list would have to be last start winner Brent Vosbergen, who fought his way to the front and went on to claim a thrilling feature race just last weekend. Vosbergen, the current WA Champion, has certainly been in great form already this season, the only driver to claim multiple feature wins so far this year, and is hungry for another this Saturday night.

Michael Holmes leads the Carbusters Pro Dirt Series rankings and Warren Oldfield the Perth Motorplex Track Championship, but neither is content to settle with those results. Oldfield is looking for his second feature win of the season after claiming his first at the second Motorplex show, while Holmes, despite being on the podium three times now is yet to claim a win. Both were on the podium at the last show and either of these drivers could be in for a good win this weekend.

Jay Cardy had the best run of his season last week with a fourth place finish and will be looking to build on that, while he was followed in the results by Veronica McCann, also recording her season best result in fifth and Jason Oldfield, his best result of sixth. All three of these drivers have the talent, experience and car speed to make even more of an impact on this weekend’s results.

Despite a dominant win at Bunbury a few weeks ago, Marc Giancola wasn’t quite where he wanted to be at the last show and will be searching to reclaim that form this Saturday night while Paul Stubber and Kye Blight have also had a rough season thus far and will be hopeful of turning that luck around when they hit the track this weekend. 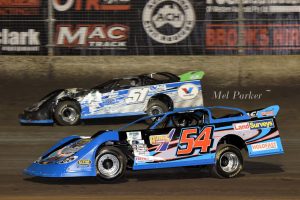 will be looking to add to his tally, while Freddy Kinsella, last years Rookie of the Year, recorded a good podium a couple of weeks back and he too will want to recreate those results.

David Boyes makes his first trip to the big smoke in his Late Model, Nathan Callaghan returns after missing the last couple of rounds and a whole heap of others are ready to have their say Saturday night, so make sure you don’t miss a single second of the action!

It will be a big night of racing for the Late Models, with four eight lap heats (two per driver) prior to the all important thirty lap feature to decide the winner of Round Six of the Carbusters Pro Dirt Series!

Pics: Jason Oldfield, David Nylander and Matt Amato are all back in this weekend’s field. Pics Courtesy the lovely Mel Parker.