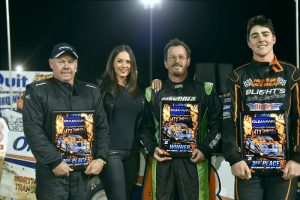 Marc Giancola has returned to the winners circle once again in what was another great show last weekend, in an event that would honour the Krikke Boys at Bunbury Speedway.

Giancola was in fine form, setting QuickTime and recording a heat win and a second place, setting up a front row start of the feature.

Jay Cardy would also start from the front row of the feature, but after contact on a first attempt saw the field called back for a complete restart, Cardy was forced infield due to damage sustained.

Giancola would get the best of the next attempt at a start and began to pull away from the field. Behind him Brad Blake settled into second place while Michael Holmes held down third for much of the early going.

Holmes was then challenged and eventually passed by Kye Blight for third on lap eight, before heading infield two laps later, allowing Brent Vosbergen to move into fourth and Paul Joss into fifth.

With a number of other competitors including Kodee Brown, Jason Bond, Mark Webster and Jayden Meckenstock heading infield, the field was down to nine competitors remaining for the final few laps, but the order didn’t change.

Despite Blake’s best efforts Giancola crossed the line first, just 0.842 seconds ahead of Brad Blake, while Kye Blight held on for third ahead of a fast finishing Brent Vosbergen. The finishers were rounded out by Paul Joss, Chris Pavlovich, Jai Mazzini, Ken MacPherson and Morgan Melvin.

Earlier in the night Giancola was the fastest car around the Bunbury Bullring in qualifying, while Jay Cardy claimed two heat wins, with Giancola and Brad Blake claiming one win apiece.

The Late Models will have only a small break this week as they are all set to compete again this weekend at the Perth Motorplex in a very special event, where drivers will be competing topless!

Stay tuned for more details later in the week.