Marc Giancola has tonight at the Perth Motorplex won the first Maxima Oils Late Model Pro Dirt Series feature race of the season, putting all his opponents on notice that at this stage, h 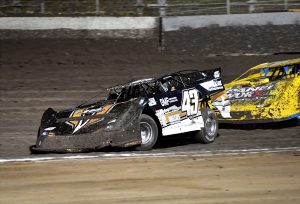 e is going to be the one to beat!
Giancola was in form from the get go, claiming a pair of solid heat finishes (a second and a third) to set himself up with a second row start in the feature race behind the front row of the impressive Brent Vosbergen and the ever strong Warren Oldfield.

Warren got the jump at the initial start with Vosbergen settling into second and Stubber moving to the outside line for third. As this happened, Stubber and Vosbergen touched, with both bouncing and Stubber in particular lucky not to hit the wall.

Both drivers continued on, but the yellows were on after one lap was completed after Jamie Oldfield and Lionel Kirkby came together in turn one in a separate incident. Veronica McCann was also involved in another incident at the same time which saw her spin.

On the restart it was Stubber who was in second while Marc Giancola was the next to make his presence felt as he moved into third before taking second from Stubber shortly after.

Kye Blights shocking night continued as he headed infield, with Oldfield continuing to lead Giancola and Stubber, while behind them Brad Blake was fighting Vosbergen for fourth. Behind them again was Jamie Oldfield, Michael Holmes and Ryan Halliday who were also having a good battle for sixth.

The top three were running in very close proximity, with Stubber going hard as he went looking under Giancola, but it resulted in a coming together with a lapped car, seeing him spinning across the track, just being avoided by Blake and McCann coming behind them. Unfortunately for Stubber, he suffered too much damage in the infield, while the rest of the field closed up for the restart.

On the restart Blake passed Vosbergen while Jamie Oldfield began to pressure him for fourth. Meanwhile, back up the front, Giancola grabbed the lead from Oldfield on lap nineteen with an inside pass and then began to pull away as Brad Blake then began to close on Warren for second.

Lapped traffic then began to play havoc with some of the leading cars and Jamie Oldfield utilized this and moved into fourth.

With twenty five laps complete of the thirty lap distance, Veronica McCann spun infield on turn four, with Lee Watt and Jeremy Hale al
so coming together at same time in the same corner but up on the high line.

The ensuing restart saw the top four battle, with Blake moving through clearly into second and chasing Giancola while the Oldfield brothers fought side by side for third and Ryan Halliday continued his charge through field to be fifth. 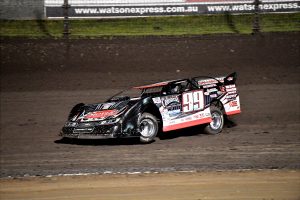 Despite the pressure, Giancola was able to hold on for the win in what would be round two of the Maxima Oils Pro Dirt Series, crossing the line ahead of the hard charging Brad Blake and the consistent Warren Oldfield.

Earlier in the night heat racing was fast and furious, with Michael Holmes just leading home a fast finishing Giancola in the opener while Warren Oldfield claimed the second. Brent Vosbergen and Paul Stubber claimed the other preliminaries.

The Late Models now have a short break to regroup, with the third round of the Maxima Oils Pro Dirt Series to be held at the Perth Motorplex on the 5th of November in the 10th and final Magic Man 34 race.