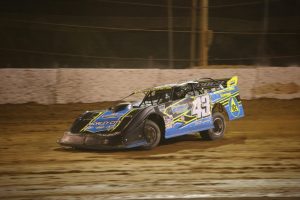 Marc Giancola has tonight put in a dominant performance in the feature race at the Make Smoking History Bunbury Speedway to emphatically win the fourth round feature race of the Carbusters Pro Dirt Series.

Seventeen cars headed down south to the Bunbury venue, with heat wins shared by Warren Oldfield, Marc Giancola, Freddy Kinsella and Michael Holmes, while Holmes did enough to score the pole position start.

The initial start of the thirty lap feature saw Marc Giancola fly around on the highline to grab the lead but it all amounted to nothing as a number of cars came together in turn two, bringing out the yellow lights.

Stubber, McCann and Blake would all be forced infield, with eleven cars facing the starter for the second time.

Giancola again would blow the field out of the water straight away, grabbing the lead and he was over three seconds ahead of second placed Michael Holmes by lap three.

Jay Cardy would head infield after five laps and Lee Redmond after lap six, but up front Giancola was five seconds ahead by lap seven, with Holmes running second and Warren Oldfield in third.

Giancola found himself in lapped traffic on lap eleven, but even that didn’t slow him down, seven seconds ahead by lap thirteen.

Kinsella was the man making the moves, closing the gap between himself and third placed Oldfield with ten laps remaining.

Ameduri, who was running in fifth place, then rode the wall coming down the main straight on lap twenty two and headed immediately infield, but back on track Kinsella was right on Oldfields tail and on lap twenty four used the outside line to grab third place.

From here the order remained unchanged, Giancola becoming the fourth different winner from four meetings so far this season while Holmes was a decisive second, allowing him to build on his overall series lead. Kinsella was third with a great drive, his first podium in a Late Model while Warren Oldfield, David Boyes, Cody Avins and Ken Melvin rounded out the only finishers.

Once again the Late Models will be back in action in short order, the fourth weekend of racing in a row, with the fifth round of the Carbusters Pro Dirt Series to be held next Saturday the 16th of November back at the Perth Motorplex, doubling as the King of Kwinana. 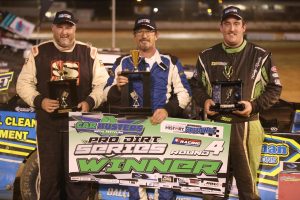