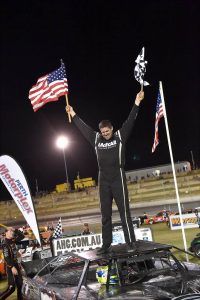 Model Nationals at the Perth Motorplex.

Fitzgerald, who earlier set Quicktime to open up the night and recorded second and third placings in his heats, would start out of position two alongside the impressive New South Welshman Ryan Fenech who was third in qualifying and recorded a win and a second place in the heats to be top points.

Devin Moran and Joe Godsey would start on the second row to round out a visiting dominance while Kye Blight and Brad Blake would be the first of the local drivers on the third row.

Fenech would get the first jump at the start, with Fitzgerald jumping up high in turn one, baulking slightly in turn two and then all of a sudden planting his right foot to grab the lead in a spectacular move down the back straight.

Behind them Godsey would look underneath Fenech for second but couldn’t quite grab it.

Next to make the big moves was another American in Tyler Erb, who, starting out of position seven quickly snatched third place while battles raged all over the tracks three and four wide.

Fitzgerald would open up a lead over Fenech and Erb, while Kye Blight went high and Godsey low in the battle for fourth. Blight would pass him for the position, albeit momentarily as he clouted the wall and allowed him back through, with yet another American Devin Moran also ducking through.

By lap seven Fitzgerald was into traffic and it was about here that chaos began to break out. Second placed Fenech pulled infield with a damaged rear end as Fitzgerald approached a massive pack of nine cars battling it out for position, seeing him ducking and diving, while ahead of that pack was the mid pack battle, which all came undone after a few cars tangled. This incident included visitors David Doherty, Ben Nicastri and Cameron Pearson as well as local Nuno Mendes, with Pearson and Nicastri unable to restart.

On the restart, Fitzgerald got away quickly but this time Erb went with him as third placed Moran fought off a 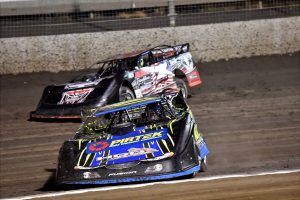 charging Blight and Paul Stubber was throwing everything he could at fifth placed Godsey to get through.

With ten laps complete the yellows came out again, this time for a spun Jarrin Bielby, and again the trio of Americans would lead away. Fitzgerald and Erb put on a real show as they quickly got into lapped traffic once again, then all of a sudden Moran slowed and pulled infield with overheating issues.

The race continued on around him and the other retirees though, with Blight closing in on Erb in traffic at the halfway distance. Fitzgerald continued to run the highline with Erb just behind him, Erb then making a go of it down the bottom which didn’t come off.

Stubber would then close on Blight and the top four were suddenly all within striking distance of each other with fifteen laps remaining.

Again Fitzgerald pulled away with a paralyzing burst of speed as Blight began to pressure Erb again before making the pass for second on lap twenty eight, the duo just 0.031 seconds apart. Erb fought back quickly and reclaimed the position, but the battle was far from over, the duo going at it lap after lap before Erb suddenly pushed up and allowed Blight through with six to go.

With four to go Bielby bought out the yellows for the final time and was sent to the infield, with Joe Godsey deemed to overlap on the restart and put under protest.

With two to go Blight made an identical mistake to Erb earlier in the race, pushing up on the cushion and allowing Erb underneath for second, with Fitzgerald going on to record the win from Erb and Blight.

Paul Stubber came home fourth while Warren Oldfield charged through the field from eighteenth to round out the top five. Joe Godsey was officially sixth after a penalty and the last car on the lead lap, followed by Craig Vosbergen one lap down in seventh, Paul Joss in eighth after coming from the B Main, Matt Goodlad ninth and Jeff Roth in a fighting tenth place. 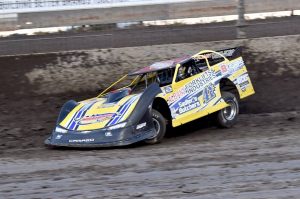 Jay Cardy, with Godsey the only one to score dual heat wins.

In the process of grabbing the forty lap feature event, Fitzgerald became just the third driver to claim a win in the Invasion Series and again held off the advances of Australian drivers who are still yet to grab that elusive win.

The Late Models should be incredibly proud of their efforts tonight, putting on a great show throughout the entire evening, and really showing how far that the division has come as a whole. Even Perth Motorplex Speedway Manager Gavin Migro was thrilled.

“The Late Model division should stand up and take a bow” he exclaimed. “The racing action was second to none and anyone who missed it, missed out on a real show, so make sure you are here tomorrow to see some more world class action from the Late Models!”

If the weather holds off tomorrow (Sunday) we will be back at the Perth Motorplex with another event, all points still counting for the Di Candilo Steel City Invasion Tour and the Perth Motorplex Track Championship and a prize purse on offer for the feature.

As an aside, courtesy of tonight’s results, Brad Blake now leads Warren Oldfield by two points in the Perth Motorplex Track Championship with Jay Cardy six points further back in third.

Stay tuned tomorrow for all the latest updates!