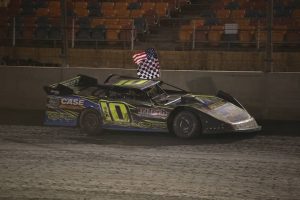 the Perth Motorplex and in the process extended the winless streak of Aussies in the Invasion Tour features.

Erb became the fifth American to win a Late Model feature at the Perth Motorplex in what was another epic feature race, the second in as many days.

Fellow American Joe Godsey would start the feature race from pole position courtesy of two heat wins earlier in the night, while Paul Stubber, who claimed a win and a second place in his heats, would join him on the front row. Erb would come from position three while Craig Vosbergen would start alongside him in position four.

As the race went green for the first time, Godsey grabbed the lead by a nose as Stubber worked the outside line. From out of nowhere though, Erb suddenly ducked through on the inside of both competitors and would lead the opening lap.

Stubber would then pass Godsey and begin to look for a way past Erb, but Erb pulled away, followed by Stubber, Godsey and Vosbergen. Behind them Michael Holmes was leading a pack of cars including Devin Moran, Warren Oldfield, Brad Fitzgerald and Kye Blight who went four wide for sixth in an amazing spectacle.

Erb continued to pull away as Godsey suddenly slowed to a stop with four laps complete, suffering a flat front right tyre and bringing out the first caution of the race.

As the race restarted again, Erb got away cleanly, but all of a sudden a few of the back markers came together and spun to a stop without any more laps being complete, seeing the field called back for another go.

Again Erb would lead away Stubber, with Blight using the highline to attempt a pass on Vosbergen. It didn’t come off straight away, but on lap six Blight made the move stick and grabbed third as Vosbergen, Holmes, Fitzgerald and Moran all followed in close quarters.

The yellows came on again with seven complete as Victorian visitor Cameron Pearson blew a tyre and came to a stop in turn one while running ninth.

Erb held the field up at the next start then took off, putting the rest of the field under pressure and Blight made the most of it, moving under Stubber for second shortly after, while Fitzgerald would also move into fourth past Vosbergen.

Stubber persisted with the low line and Kye ran high to make the smallest of passes, the duo just 0.023 apart as they crossed the line on lap ten. Stubber grabbed second again on lap twelve, with Fitzgerald sitting right behind Blight and Stubber but unable to get through the two battling WA competitors.

Erb found himself in heavy lapped traffic on lap fourteen, with Stubber about four lapped cars behind him. Stubber then got baulked in traffic and gave Blight the chance to catch him, going high and then switching low but unable to quite pull the move off.

The duo separated, passed the cars using different lines on different parts of the track and then rejoined, Blight powering his way past Stubber for second once more. 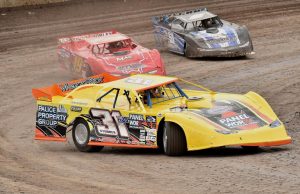 Erb was able to continue pulling away as Blight and Stubber battled it out lap after lap for second, with last night’s Nationals winner Fitzgerald unable to do anything except watch as the two went at it hammer and tongs.

With just three to go the cautions came on once again, this time for a spun Willy Powell on the main straight, a number of cars lucky to avoid him as they came around and setting up a three lap restart with Erb to lead away Blight, Stubber, Moran, Fitgerald, Vosbergen and Jay Cardy.

The yellows came out once again shortly after with two to go; Jarrin Bielby having spun in turn two and the whole field just avoiding him until Cardy and Vosbergen appeared to make contact as the went around him, the duo stuck together against the back straight wall and becoming the final two retirees of the race.

This would set up a green, white, chequer, restart, with Erb to lead away Stubber, Blight, Moran and Fitzgerald. Erb led away, Stubber followed and Blight went high on the restart, allowing Moran underneath momentarily before Blight fought back once again to retake the position.

In the end though it was Erb who claimed his first feature win on Australia soil, defeating Stubber, Blight, Moran and Fitzgerald in another fantastic race.

The Di Candilo Steel City Invasion Tour now heads down the highway to the mining town of Collie on Friday Night for Round Three, so make sure you make the trip because if the last two nights at the Motorplex are anything to go by, it is certainly going to be worth it!